Difference between revisions of "J7W1"

The J7W1 Shinden is a bomber interceptor designed to make quick work of raiding bomber aircraft. It has exceptional performance at altitude, more than exceptional aramament and a decent climb rate. Double the weight of a fully loaded A6M, and definitely heaps faster to make up for it. This aircraft thrives with boom and zoom, and has a great energy retention at speed due to sleak aerodynamics. Inherently less stable than a normal tail plane thanks to a rear mounted engine push thrust configuration canard design, it is known for rapid pitch angle changes, great roll rate and less drag, by design. The flap system does not work in game currently however it enhances negative G two fold, at the cost of your speed. The aircraft is very prone to fires however, a single hit to the fuel tanks will result in an inextinguishable flame that will for sure be your demise. 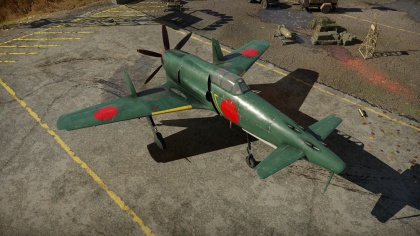 The J7W1 Shinden has a maximum speed of 892km/h, 558mph, 485kias (this is Vne speed - the absolute maximum speed). In a dive from service ceiling, a speed of mach 0.9 has been recorded and is sustained until IAS speed limit is reached. The aircraft can handle a max load of 11g and compresses rudder, pitch and roll at extremely high IAS speed in order of descending effect.

Very prone to fires, and difficult to extinguish. Armor glass (70mm) in front of pilot and steel armor plate (17mm) in front of pilot in between guns. Engine snipes common, due to the position of the engine. Wing tip damage can increase likelyhood of unrecoverable flat spins.

The J7W1 can be outfitted with the following ordinance:

The Shinden is armed with 4 30 mm frontal cannons, making it quite the slugger. Due to its slow turn time, it is usually best for the pilot to engage enemy fighters head-on, or from above and behind since usually, a single burst of shots can easily knock even heavy bombers out of the sky. Regarding fire from bomber gunners and head on engagements, the plane's armour enables it to take some beating to the wings, but the pilot is heavily exposed from the front. Should this plane be forced into a turning fight, it will almost certainly lose since its BR means it will face up against faster-turning Spitfires and P-51Ds. Its speed might be used to its advantage in order to retreat or gain some distance before attempting to initiate head-on combat.