Difference between revisions of "J6K1" 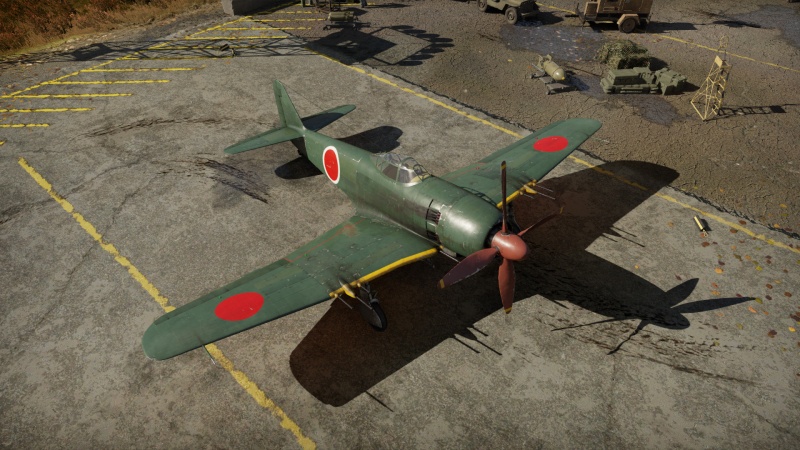 The J6K is a decent fighter.

Designed to intercept and destroy US B-29 formations (like most late war Japanese fighters), it has a 3 stage supercharger and heavy armament.

The aircraft is somewhat heavy and while the manouverabilty is still pretty good, the climbrate and speed are generally sub par to its counterpars (P-51H, Bearcats, F4U/F2G etc.).

For a Japanese aircraft the speed is good as they are generally quite slow.

The J6K1 Jinpu is an ostensibly well-armed aircraft, boasting the most cannons of any Japanese aircraft. Although the Type 99 Model 2's lack the stopping power of the Type 5/Ho-155 30mm cannon which can be found on multiple Japanese aircraft of the ranks IV and V, they can do the job well when aimed accurately. The Type 3 HMG's are also reasonable spotting weapons that have similar muzzle velocity to the 20 mm's and are quite accurate, allowing for easy follow-up shots. One should not rely on the HMG's as they deal negligible damage. Due to the considerable space between the cannons, it is recommended to set a convergence around 500m, depending on experienced you are with shooting these guns at higher ranges . Otherwise, you will only be hitting the target with your practically nonexistant 13mm HMGs.

Your belt setup should be either stealth or universal for all guns. However, universal for the cannons and stealth for the HMG's allow you to focus on tracking with the cannons, which helps with players who either are learning to or have trouble with aiming them.

The 20mm HEF round has more explosive filler than the HEF-I and HEF-T round!

The J6K1 can be thought of as a slightly heavier N1K2. This means your climb rate and turn rate have been nerfed somewhat. In the beginning of each battle you will need to sideclimb as the J6K's added weight makes the climb rate rather subpar against many of your opponents. It is reasonably manoeuvrable and beats every American aircraft spare the P-59A in RB, it is not enough to outturn highly manouverable planes like the Re 2005 or Spitfire LF Mk IX (though it will outturn the later and heavier Spits with clipped wings)

However, it holds specific advantages over all of these aircraft, which changes depending on which one it's engaging. Versus Merlin Spitfires it outspeeds them and destroys them at high altitude, versus Griffon Spitfires it can outmanoeuvre them and it's considerably faster than the Re.2005 and can deal quite a bit of damage with its large armament setup. The only exception to these are the Bf 109's, as your approach style will have to change depending on the variant of the Messerschmitt in question and if they are mounting gunpods or not. You can outmanoeuvre them when they mount the gunpods but you can't outspeed them. Ideally, you should Boom-&-Zoom 109's if you have an altitude advantage or try to head-on them but the latter poses a significant risk due to the lack of bulletproof glass on the J6K.

Speed and altitude are your best friends when piloting the Jinpu. The Nakajima Homare 42 engine that powers the aircraft is tuned for high altitude combat, and is quite poor at altitudes below 2,000m, so altitudes around or above 4,000m are your ideal combat areas. Once you reach that altitude, start hunting for bombers and high flying attackers, then tear them to shreds with your impressive armament layout. If there are no bombers or they have all been destroyed, you are free to fly a more reserved high altitude energy fighter role versus other fighters. Be aware of the low absolute rip speed of 780 kmh/484 mph while diving on enemies!