Difference between revisions of "J32B"

The J32B Lansen is a rank VI Swedish jet fighter with a battle rating of 9.3 (AB/RB/SB). It was introduced in Update 1.95 "Northern Wind". 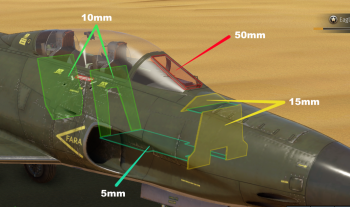 Thickness of each armour section located in the J32B.

The J32B can be outfitted with the following ordnance:

This aircraft excels at being fast, it is important to use that advantage to quickly Boom & Zoom any unsuspecting enemies. Avoid utilising turning manoeuvres with other aircraft as every aircraft with the exception of the F-100D will shake you rather easily and you risk being pulled into a "reversal". Although you can easily out-run most jets, some aircraft like the Etendard IVM, MiG-17AS and Shenyang F-5 will easily catch up. These aircraft prove deadly to the J32B as they will keep up with your turns if you try to evade them, not to mention they also carry air-to-air missiles which they will certainly use to force you to bleed speed (if you don't get destroyed in the process). Your safest bet is to go in a straight line hugging the maximum safe speed (concern for realistic and simulator battles) and hope they pull away.