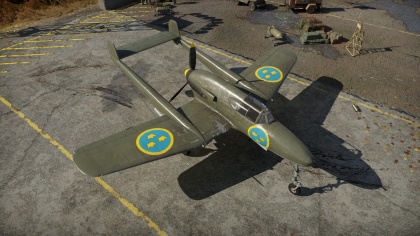 The J21A-2 (along with the rest of the J21A variants) is an excellent energy fighter. The plane retains and gains speed very well, as long as it is flying in a straight line. In level flight or in a dive, the J21A is very fast and can outrun most of its opponents. Additionally, it can manoeuvre quite well compared to some of its opponents but pilots must watch to ensure their speed does not drop too low as this makes the J21A an easy target. The nose mounted armament makes it possible to successfully fight head-on with opponents and the 20 mm cannon is especially devastating when combined with the 13.2 mm machine guns. This armament also makes the J21A good as a bomber-interceptor since it can knock out critical components of an opponent's aircraft very quickly.

Another effective tactic is to fly level and fast at medium altitude 2000-3000 meters and act as a support fighter, assisting team mates who are overwhelmed by picking off some of their opponents in hit-and-run attacks. While the J21 can manoeuvre quite well (especially with combat flaps) it is not advisable to do this except as a last resort because the aircraft bleeds speed very rapidly. Also, this can expose the J21's engine (mounted in the rear of the aircraft) to and an enemy, allowing him the opportunity to knock out the J21's engine or hit its fuel tank (centrally located between the cockpit and the engine). This is another reason to avoid running away from an opponent, except when you can dive faster than the enemy or outclimb him. Many planes at the J21's level can keep up with it, although many also cannot. As long as you know your opponent and their capabilities, you can use the J21 very effectively.