Difference between revisions of "HMS Liscomb" 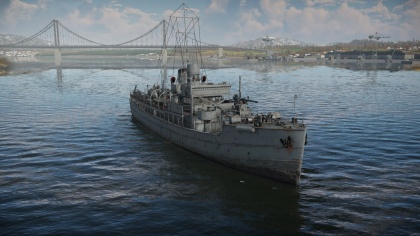 The Isles-class, HMS Liscomb (T-285) is a rank II British sub-chaser with a battle rating of 1.7 (AB/RB/SB). It was introduced in Update 1.83 "Masters of the Sea" as part of the British fleet closed beta test.

X-Ray profile of the T-285. Note the large engine at the centre and the ammunition stored in the lower bow of the ship.

The T-285 is a large, heavy ship. As such it doesn't possess very good mobility or speed. Even with all the seakeeping upgrades installed the T-285 is a slow ship that has difficulty manoeuvring around the map. Coupled with its tall profile and relatively large size, captains of this ship can often find themselves to be an easy target. Torpedoes and aerial bombing, in particular, are rather dangerous as by the time you realise they're heading for you, you wouldn't have enough time or navigational ability to avoid them.

As such, the T-285 works well as a support craft to other ships by staying at a distance where it can use this to minimise the number of enemy ships and torpedoes that can engage it while supporting allies with the potent 4 Inch QF Mark V cannon with the three Oerlikon Mk. II cannons providing anti-air support. Other notable upgrades include shrapnel protection that provides the interior to shrapnel resistance.

While the T-285 is a large, heavy ship, it maintains a forward max speed can reach up to 24.7 kph (or 32 kph with the appropriate upgrades). However, these did little to improve the T-285's manoeuvrability.

The main armament is the 4 Inch QF Mark V cannon with a maximum of 150 rounds stocked on board. With a choice of high-explosive, semi-armour piercing and fragmentation rounds. With a muzzle velocity of 805 m/s, hitting targets up to 4 km shouldn't be too difficult although the gun is prone to the occasional inaccurate shot. Generally speaking the high explosive rounds will be enough to tackle any target the T-285 will encounter and while you might encounter destroyers where the semi-armour piercing rounds would be better suited to the task, the opportunity to do so is unlikely given the number of shots it would probably require to sink them let alone survive long enough from counter-fire or aerial bombardment to do so. Fragmentation rounds can be rather potent as well but given the nature of their timed explosive they can be rather inconsistent but with enough practice and skill, it is possible to use this to your advantage, even in knocking out any low flying aircraft if you're good enough.

Auxiliary armaments consist of three 20mm Oerlikon Mk. II cannons with two sitting behind the Mark V cannon and the third sitting on the aft. Ammunition belts are the Universal (HEF-T. HEF-I, AP-T), High Explosive (HEF-T. HEF-I, AP-T, HEF-I) and Armour Piercing (AP-T, AP-T, AP-T, HEF-I). These guns provide good anti-air support but can also be used to against any smaller, faster ships within 2 km or less regardless of ammunition used. Flanking the bridge is a pair of dual-mounted 7.72 Lewis Machine guns that are technically designated as the ships anti-air guns but given their small calibre and somewhat awkward angle they shouldn't be relied upon.

Finally, the T-285 can also deploy the Mk. VII depth charge behind it with a rather high capacity of 20 charges. But considering the ship's slow speed and poor mobility the chances of getting close enough to enemy ships to use them is very rare and therefore it's not recommended to carry them as they are an explosive liability when exposed to enemy gunfire.

Despite being classified as a minelayer, the T-285 acts more like a heavy gun platform with it's varied and effective weaponry on a slow-moving ship. Because of its large size and poor mobility, it's not particularly suited to the frontlines and tight spaces. Instead, captains of the ship should provide covering fire for allies from a distance. This is to make yourself a smaller target against ships and give a higher chance to avoid torpedoes as well as the fact the Mark V cannon has good muzzle velocity for attacking distant targets while reducing counter-fire

The Oerlikon guns should concentrate on providing anti-air support as bombers often find the T-285 to be a rather attractive target due to it's size but you should also be aware of any enemy motor torpedo boats attempting to deploy their torpedoes on you which is where the Oerlikon guns can be used to counter them, particularly if they are within 1 km or less to you as the Mark V cannon may not have enough time to react to them. One final note about the two Oerlikon guns behind the Mark V cannon is that they have limited negative vertical traverse when pointed towards the bow. As such, when attempting to aim at any close proximity targets in front of you, you will need to turn the ship left or right from the target to give the guns enough depression to aim down at them.