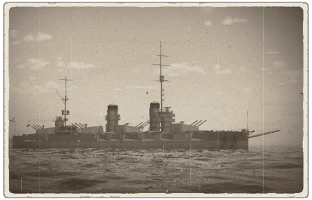 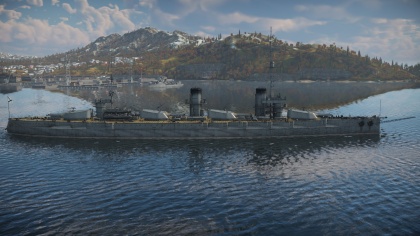 The Imperatritsa Mariya, 1916 is a rank V Soviet battleship with a battle rating of 6.0 (AB/RB/SB). It was introduced in Update "New Power".

The first battleships of the "dreadnought" type in the Russian Empire entered service with the Baltic Fleet, they were battleships of the Sevastopol type, laid down back in 1909. The proximity of a world war and information about the serious strengthening of the Turkish fleet forced the Tsarist government to start building three battleships similar to the ones in the Baltic for the Black Sea Fleet. The general architecture, key technical units, three-gun turrets were borrowed from the battleships "Sevastopol". Three battleships for the Black Sea Fleet were laid down in 1911, all new ships were named after the Russian monarchs. Tests of the battleship Imperatritsa Mariya (Russian for “Empress Mariya”) ended in 1915, the ship was immediately put into service and began to perform combat missions.

With the advent of Russian dreadnoughts, the situation on the Black Sea changed dramatically in favor of the Russian Empire. Imperatritsa Mariya provided support to the 2nd brigade of battleships near the Turkish coastline in the fall of 1915, at the end of winter it took part in the Trebizond landing operation, and in the summer of 1916 became the flagship of the Russian Black Sea Fleet.On October 20th, a powder storage detonated and a fire occurred on the ship, the subsequent series of explosions caused the destruction of the battleship. More than 200 sailors perished, the ship sank near Sevastopol. With great effort in 1918 the ship was lifted and transferred to dry dock, but restoration work was never completed due to the social and political crisis in post-war Russia. In 1927, the battleship Imperatritsa Mariya was dismantled for its metal.