Difference between revisions of "Ikv 73" 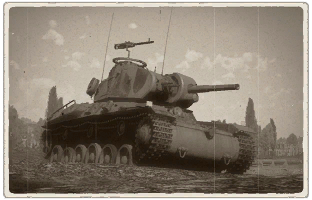 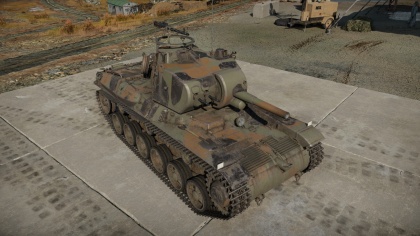 The Infanterikanonvagn 73 is a premium gift rank II Swedish tank destroyer with a battle rating of 3.0 (AB/RB/SB). It was introduced during Update "Starfighters" as a reward for the 2020 Operation S.U.M.M.E.R. event.

Armor protection on the Ikv 73 is average for its tier. While it is 55 mm thick, it is practically vertical. Angling your armor will not help, as the sides are only 30 mm in thickness. The turret armor is pretty much identical to that of the hull. The crew is very tightly packed, so a penetrating shot to the turret or hull is a guaranteed destruction.

Although the best course of action in an Ikv 73 is to remain undetected, there will be times when taking a hit or two will be inevitable. In such a scenario, angle slightly towards the enemy with your front right corner (the one opposite the driver) and try to bait a shot to your right turret cheek (the one with the coaxial MGs). Early HEAT and HE projectiles, as well as the spalling from weaker APHE and Soviet shrapnel rounds, will likely be absorbed by the machine guns. Solid shot will be almost guaranteed to penetrate, but will only kill the commander and machine gunner. Most shots to the rear engine deck will likely bounce due to the extreme sloping.

Mobility of the Ikv 73 is good; about the same as that of the Shermans or earlier Panzers. The tank swiftly accelerates to its top speed of 42 km/h (26 mph), and stops just as easily (though the tank tends to "drift" slightly when stopping mid-turn. The tank reverses at 5 km/h. The suspension damping allows for firing immediately after coming to a stop from full speed, though it is not powerful enough to allow for accurate fire while on the move. The Ikv 73 lacks neutral steering, but still turns about as quickly as its contemporaries.