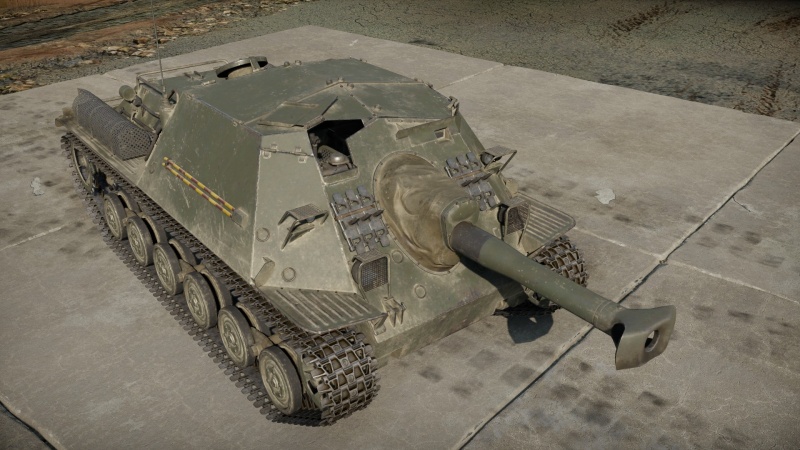 The Infanterikanonvagn 103 is a rank III Swedish tank destroyer with a battle rating of 4.0 (AB/RB/SB). It was introduced in Update 1.97 "Viking Fury".

The armour of the Ikv 103 is between 5 and 18.5 mm of thickness. This kind of armour shouldn't be considered as survivable since any round will penetrate it and destroy most of what's left inside the SPG. One could argue, that the front is decently protected, but there is a giant visible hole in front of the gunner, which can be hit by a machine gun easily.

Since the hole exists, any chemical ammunition will instantly destroy the Ikv 103 regardless of where it hits. It is heavily recommended to avoid any form of damage since artillery fire is guaranteed to destroy the SPG even in the case of a close miss.

The thin side armour has the occasional ability to result in overpenetration and often fails to set off APHE fuses, but any frontal armour will activate them.

The SPG is also incredibly weak against aerial attacks. The roof won't protect from any calibre larger than a 7.7 mm MG, and even that much is not guaranteed. But, since it actually exists, it makes less knowledgeable fighters attack something else instead, as they often look for an open-topped tank first.

Thanks to the short length of the rounds, as well as compact storage on the hull floor, ammunition explosions are quite rare. Due to this, taking the maximum amount of ammunition isn't something to frown upon.

The Ikv 103 is outfitted with a 105 mm cannon firing heavy shells with a reload of 8 to 10 seconds depending on crew qualifications. This cannon is unusually short for its calibre, firing heavy shells with low-velocity. The gun is aimed manually without the help of electrical equipment, resulting in a slow traverse rate. At maximum, the gun traverses at 8° per second, resulting in many deaths at closer ranges. The stock gun accuracy is above average.

The gun has a significant recoil, which can mess with the aim in RB/SB and will slightly move the tank backwards. The recoil can also be used as an advantage to fly off the hill as fast as possible before an enemy started firing back.

Although the early psgr m/49 lacks significant amount of angled penetration and post-penetration damage, it works just fine at medium to long range. It can also be easily launched over cover at 450 m range while the SPG is fully concealed, which makes it useful in any situation. The later slpsgr m/65 HEATFS round packs up to 400 mm of flat penetration, generally penetrating anything it sees and making the post-penetration much deadlier than before. This later shell also features a higher velocity than the previous round, so it might actually hit moving targets.

Unfortunately, a lot of heavy tanks have near-impenetrable machine gun ports and even HEATFS will fail to get through them, so the gun cannot be fired entirely without care. If the Ikv 103 is used as a backup along with the 7.0 lineup, it will often fail to penetrate or bounce off the turret of many US heavy tanks due to their sheer thickness.

This makes the gun most effective at medium ranges, where the traverse is ideal, and the shell velocity isn't crucial. It should be noted that the incredible gun depression allows the Ikv 103 to fire directly from extreme angles allowing it to suddenly engage targets in RB without the risk of overexposing the tank, something which becomes incredibly useful to increase the vehicles survivability. 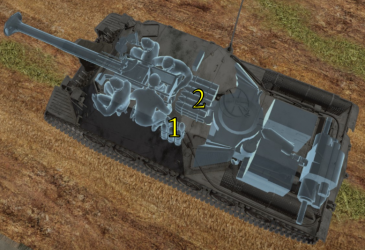 The Ikv 103 is a nimble vehicle with a small silhouette compared to its peers. The lightweight and powerful gun set it apart from other vehicles at the battle rating.

The general playstyle can be compared to the Jpz 4-5 found in the German tech tree, as the vehicle has to make use of positioning rather than frontal survivability. The Ikv 103 can't use common sniping locations effectively since any form of enemy retaliation will destroy the vehicle completely. Instead, the 103 needs to drive full speed to various locations where enemies are unlikely to expect danger. Although this playstyle requires a lot of map knowledge, the reward is quite high for a successful flank, thanks to the devastating cannon the Ikv 103 carries.

Thanks to the light vehicle weight and strong engine, the Ikv 103 is also able to climb a lot of obstacles, something that helps a lot when fighting on bad terrain. However, maps that lack terrain entirely cripple the 103's performance quite significantly, since the tank cannot hide, resulting in a lot of face-to-face engagements, which the Ikv 103 almost always lose.

In AB, when it's impossible to find a good hill or the enemy is just too good, one can use this SPG as a mortar to bombard enemy tanks at about 450 m range with HEAT straight out of cover. Any cover that completely covers the SPG will work at this point, whether it's a random rock or terrain. It's also technically possible to fire over shallow hills while standing on them at ranges of about 300 m, but this is not entirely safe and constantly leads to situations, in which Ikv 103 is flanked or sniped. This playstyle works quite well over flat plains and some sniping hills, which are generally incapable of stopping shells with low velocity, but will likely block high-velocity APHE of all enemy tanks. Use binoculars to track enemy movements and to pre-aim. Be careful to not provoke other HEAT tanks into an artillery battle unless you are sure about your aim, as the Ikv 103 won't survive even a single HE/HEAT hit.

In 1952, a cannon-equipped version, under the designation the Ikv 72 (short for "infanterikanonvagn", meaning "cannon-equipped infantry-support vehicle" in Swedish), was put into service. A little later, the SPGs were re-equipped with 105 mm howitzers and the cabin was retrofitted with a roof, which could protect the crew from bullets and shrapnel. This modification received the designation Ikv 102. Meanwhile, the Swedish army ordered another series of the vehicle with an upgraded chassis to allow installation of a new air-cooled engine, while the gun and the armour remained the same as the Ikv 102's. This new version was designated Ikv 103. The Ikv 102 and 103 SPGs remained in use by the Swedish army until the mid-1970s, when they were replaced with the Ikv 91 SPG.