Difference between revisions of "IS-4M" 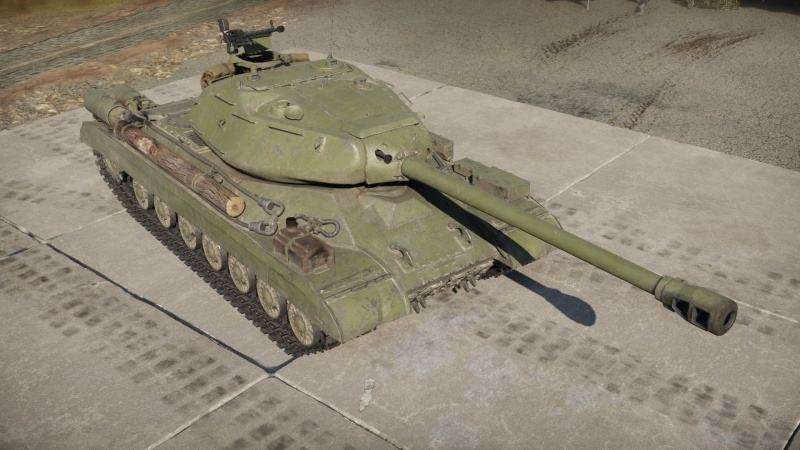 The IS-4M is a rank V Soviet heavy tank with a battle rating of 7.7 (AB/RB/SB). It was introduced during the closed beta testing for Ground Forces before Update 1.41.

Ammo racks of the IS-4M

The IS-4M is a direct successor to the IS-3, and it features even more armour, so much armour that some APDS and APFSDS cannot penetrate its UFP and most of the turret, needless to say this tank is practically invulnerable to conventional rounds from the front. Unfortunately the gun remains the same 122 mm D-25T that is featured on all IS-series tanks from the IS-2, and at Battle Rating 7.7 it isn't enough sometimes, while other times a weird bounce can still lead to some good hits. Overall, though, this tank feels much better at its Battle Rating than the aforementioned IS-3, which has a huge shot trap.

The playstyle is slightly different from its predecessor, as angling can work - it just needs to be done carefully. The frontal side armour is actually thicker than the front, so a slight angle will even-out hull armour all around (in a best case scenario it can get to 275&nbsp;mm, or just slightly more). Also, the IS-4M is less mobile, because it's heavier - all speeds are dampened and mobility is heavily impaired. However, if you've played the stock IS-3 this tank will feel a bit better.

The IS-4M will show a lot of red and yellow on the reticle when a player looks at it in Arcade. Only some HEAT and APFSDS shells can penetrate this beast frontally, and damage will only be substantial if the player takes their time to aim at the important components, because some shells will penetrate but their effect will be minimal inside the tank. However, there is little the IS-4M can do to make it harder to be damaged, because there are practically no weakspots to hide, and wiggling will not stop top rounds from penetrating.

In Arcade Battles, the improved speed should be used to rush any lone enemies and objectives. When this tank is at speed, enemies will often shoot the biggest part they see - the UFP, and many shots will bounce or not penetrate if they hit at an awkward angle; but even if they do penetrate the UFP, the IS-4M will be able to return fire because only the driver and possibly the transmission are knocked out. Very rarely will the IS-4M get one-shot through the UFP. Again, being at speed is being protected, and it is a big surprise to many enemies when a heavy tank drives around a corner at high speed - giving you extra seconds to take aim and disable them (usually you will pass them, so their side and/or rear is visible).

Important Note: Rushing mostly works in cities, where your speed is further increased by paved roads, and enemies will be spaced apart between buildings. In open areas, rushing will usually end up in the IS-4's demise, as opponents will quickly flank you because it's easy to do.

If rushing is not an option, and you find yourself in close-quarters, your best bet is to try to bait shots either for yourself or for your teammates. You can poke your gun barrel out from a corner, and if enemies shoot it, your teammates can drive out and destroy the enemy. Poking out the side of the turret or heavily angled UFP is an option, but most enemies will realize that it's no use shooting there.

In Realistic, the IS-4M retains its ability to rush, although it's subdued. When fully upgraded you can still get up to speed and surprise enemies, especially if you can choose weird routes that are not likely to be checked by enemies. From experience, it's possible to destroy up to 3-4 enemy tanks on city maps like Alaska, American Desert and Middle East, when playing against a good mix of lighter tanks (e.g. Leopard I, Centurion Mk 10, Vickers MBT), as well as some heavier vehicles that can be out-maneuvered.

Armour can protect the IS-4M, but most enemies usually have HEAT loaded, or will be able to load it for the next shot. Most importantly you should never find yourself fighting alone against 3 or more enemies, even 2 are hard to handle most of the time. At least when fighting one-on-one you can always try to retreat or one-shot them, depending on the situation (i.e. either gunner/gun or driver/transmission knocked out).

Important Note: All in all, you should play the IS-4M as if it is a slow medium tank with sub-par firepower due to the reload speed - hope that armour withstands some shots, while taking on enemies one or two at a time; if speed can be gained - use it.

The IS-4M is less painful to play when stock because at times you can get very lucky matches where no-one seems to penetrate you and you get tons of research points for withstanding a lot of shots. Nonetheless, the experience is very much similar to the IS-3 - slow tank, slow reload, gun and engine are often out of commission. Due to this, you must research Parts and FPE first, this is extremely important. Generally, you would want to be behind your teammates, to let them get shot more instead of you, when reloaded you can poke out and shoot your shot, right before going back into the cover or behind teammates. Sniping is an option, but it's not the most viable since there's quite a lot of bullet drop and missing your shots will cause the very long reload.

During the development of the IS-3 in 1944 under General Nikolai Dukhov, a separate project was underway by a design team led by L.S. Troyanov to improve the IS-2 design. This separate project commenced under the designation Object 701. The project produced three proposed design. The Object 701-2 with a S-34 100 mm gun, 701-5 with a different armour configuration, and the 701-6 with the 122 mm D-25 gun. The 701-6 was accepted for further development, to which was modified with thicker armour, longer hull, and a more powerful engine. There was some implementation of German designs into the prototype; the engine has a cooling system that uses a pair of circular fans on the engine deck, a feature also is seen on the Panther tank.[1]

Object 701 was eventually approved for production in 1947 as the IS-4. The production turned out 200 tanks (some sources say 250) before the production was halted. The reason being that the IS-4 was criticized for being inadequate in mobility despite its new engine.[1] While production ended, the remaining IS-4 still saw service in the Soviet Union. When the Korean War broke out in 1950 and the United States and its allies got involved, the IS-4s were all shipped to the Far East of the Soviet Union in anticipation of Soviet intervention in the Korean War. They were not committed despite pressure by the Chinese from fear of inciting another world war. Even so, the IS-4 stayed in the region ready for action. In the late 1950s, the IS-4 underwent a modernization program along the lines of the IS-3 with increased ammo stowage, new machine gun armaments, new gun optics, better engine, and better filtration system and this modernized variant was named the IS-4M.[1] The IS-4 stayed in service in the Soviet Union until the 1960s.

The IS-4, as a relatively unsuccessful Soviet tank, faded to obscurity with little information on it passed its development period. It was the heaviest of the Soviet heavy tanks that were slated for production. The IS-4's design was further developed on in the IS tank family with the Object 703, with the design using an electrical transmission instead of a mechanical one. This vehicle redesignated the IS-6, also proved to be problematic and was shelved.[1]

Development of this tank began in July 1943 at the ChKZ factory. The main impetus for creating a new Soviet heavy tank was the prospect of being able to install more powerful artillery on it than what was installed on the IS-2. The vehicle underwent testing until the autumn of 1944. The new vehicle had one inarguable virtue - no tank or anti-tank cannon of Soviet or German make could penetrate its 160 mm frontal armour. At the end of 1944, two more vehicles equipped with modernised transmission were produced.

In April 1945, the tank was put into service and mass-produced under the designation IS-4. The vehicle's hull was fully welded, while its turret was cast with tapering armour thickness. Along with its 122 mm D-25T cannon, it was also armed with a coaxial 12.7 mm machine gun. An identical machine gun was placed as an anti-aircraft gun on a ring mount above the loader's hatch. One of the vehicle's characteristic features was its original ammunition rack, in which shells were housed in special metal canisters. The tank had epicyclic transmission and individual torsion-bar suspension. The crew consisted of 4 people. The vehicle's powertrain was a 750 hp B-12 diesel engine. With this engine, the tank could reach 43 km/h on-road.

The IS-4 was mass-produced until 1949. In total, around 250 of them were made. These vehicles served in the Far East.

It became clear during its deployment that the tank's mass exceeded the carrying capacity of most bridges and transport platforms. It was this fact that effectively buried the idea of building vehicles with a mass greater than 50 tonnes. The IS-4 was taken out of operation and placed in long-term storage, and then withdrawn from service entirely. After this, it was often used on ballistic ranges as a target.