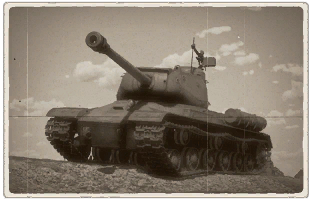 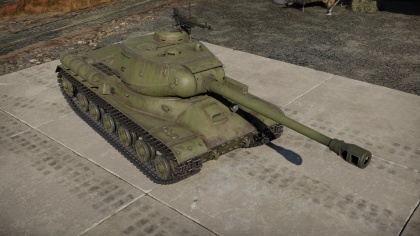 The IS-2 (1944) is a Rank IV Russian heavy tank with a battle rating of 6.3 (AB/RB/SB). It was introduced during the Closed Beta Test for Ground Forces before Update 1.41.

The IS-2 mod. 1944 was created after the initial disadvantages of the previous IS-2 model (IS-2 mod. 1943), being vulnerable against the 75mm guns of the German StuGs and Panzer IVs due to the nearly flat frontal armor. The Soviet high command then decided to produce another version of the IS-2 with a heavily sloped armor plate, generally known as the IS-2 mod. 1944. It was used successfully on the Eastern front until the end of the war and is remembered as one of the mightiest tanks of World War 2.

In the game, the IS-2 mod. 1944 sits at a BR of 6.3, which is 0.6 higher than the first IS-2. It now features a mighty frontal plate, sloped at 61° backwards and also a 12.7 mm DShK machine gun on top for AA-defense. It has the same gun as its predecessor, but even at BR 6.3, it is one of the most destructive guns in the game, with high penetration and devastating post-penetration damage.

The armor, while having a nigh impenetrable frontplate and a decent turret, has many weakspots.

First there is the right part of the turret, because while on the left side the gun mantlet is connected to the turret armor, there is no mantlet on the right-hand side, so it has just half the thickness of the left side.

Next we have the lower glacis, which is a very prominent target, with very little armor for its BR (~130mm effective thickness). Shots of a German 88 mm or an American 90 mm will wreak your IS-2 1944.

Last but not least, we have the driver's hatch. While not as prominent as the first two mentioned, many experienced players will go for a shot right here, when you are hull-down. With around 120 mm effective thickness, it is really easy to penetrate even with small guns such as the American 76 mm, and has devastating effect on your tank.

Effort began on another heavy tank after the IS-1's 85 mm gun no longer had a firepower advantage after the standard T-34 medium tank was upgraded with the same gun into the T-34-85. Due to that, the IS-1 was discontinued in January 1944 with about 107 units produced.[1] Those in storage still awaited upgrade to become a more powerful heavy tank.

In late 1943, the upgrade of the IS tank began and the choices available were rounded down to two weapons, the 122 mm A-19 gun and the 100 mm D-10 gun. Both guns had their advantages and disadvantages in their specifications, the 100 mm D-10 had a much better armour penetration capabilities and uses a single-piece ammunition, the 122 mm A-19 has a better high-explosive round and used a two-piece ammunition In the end, the 122 mm A-19 (adopted as the D-25T) gun was chosen as the gun of the new IS tank due to larger supply of the gun available for use (the D-10 was a newly produced gun) and the better high-explosive round available. The better high-explosive round is due to the heavy tank's specification as a "breakthrough" tank than a anti-tank role, so it was meant to fight fortifications more than against armour. Nevertheless, against armour, the 122 mm gun proved a very lethal cannon against armour, having the capacity to knock out any German tanks fielded in the war, even the Tiger II, though the ease of knocking them out vary from their armour protection.

The 122 mm gun's two-piece ammunition was perhaps the gun's worst drawback, this along with the heavy shells and charges that it uses causes reloading speed to only be one and a half rounds per minute maximum. Even after some modernization to the gun including a semi-automatic breech, the firing rate only increased to two to three rounds per minute. Another drawback of the gun was the size of the ammunition that the 122 mm gun uses, the IS tank interior could only hold 28 of such ammunition, which restricts the time the IS could last in battle before requiring a resupply. In battle, the usual distribution of the shells is 20 high-explosive and 8 armour-piercing rounds.

The finished IS tank with the 122 mm gun, first called the IS-122, was finally approved and renamed the IS-2 heavy tank, some were rearmed IS-1s from the factory with the 122 mm gun. The IS-2 tank, like the IS-1, was superior to the previous KV-1 tanks used in the Red Army. Production of the IS-2 started in October or November 1943 and by the end of World War II when production ended, a total of 3,854 units were produced.

The IS-2 tank hull was similar to the IS-1 tank, but the turret was modified to accommodate the larger 122 mm D-25T gun. The suspension was a torsion-bar suspension system and the tank was powered by a diesel V2-IC engine. The drivetrain and the engine were taken from the KV-1 tank, yet was considerably more mobile. The armour on the IS-2 was a 120 mm thick front plate sloped at 60 degrees with a small step in the front for the driver's hatch. This "early version", developed from the KV-13 design, was produced from the initial production lines until some time in late 1944, where a IS-2 mod. 1944 version was modified with the front plate now a single sloped 120 mm plate at 60 degrees with no interruptions in order to eliminate shot traps and weaknesses in the armour design. Other design changes when the IS-2 was upgraded to the 1944 model was a stronger gun mount, wider mantlet, and an addition of a Dshk machine gun on the turret. The formidable armour of the IS-2 is able to withstand the 88 mm shells from the Tiger I at 1,000 meters out, yet the whole tank weighs less than the Panther at only 46 tons. Despite its construction, the IS-2 was still quite crude in quality and can have signs of being hastily built from the factories. This did not affect its battlefield performance greatly and the crude construction is merely a side effect of the fast production of the tanks to fill battlefield demands.

The IS-2 first saw action in early 1944. The IS-2 was organized in heavy tank regiments, each with 21 tanks. Their role was to spearhead the offensives launched at each sector, breaking through enemy emplacements and supporting the infantry by destroying enemy fortifications, they were not meant to exploit breakthroughs and this role was given to the lighter T-34 tanks. Their first reported action was in April 1944 in the 11th Special Guards Heavy Tank Regiment near Tarnopol, Ukraine. The IS-2 presented such a surprise to the Germans as no Soviet tanks before could engage with accurate fire from more than 3 kilometers away. A bigger shock was when they found out the 88 mm of the Tiger I couldn't adequately penetrate their armour. The IS-2 initial combat experience was limited due to the inexperienced crew and organization, but more and more IS-2 started to come in to reinforce the Soviet forces.[1]

The IS-2's next great effort was in Operation Bagration in July 1944. By this time period, the heavy tank regiments were allocated to one for each tank corps. During Operation Bagration, the IS-2 combat effort contributed to the decimation of German Army Group Center. The IS-2 was able to deal with the troublesome German Panther and Tiger I tanks with ease. By December 1944, enough IS-2 was produced that the Soviets began outfitting them to Guards heavy tank brigades, consisting of 65 IS-2 tanks with other vehicles for support. Though the number of these brigades were still limited, they proved valuable in breaking through German lines, as used in January 1945 against the German in the Oder Offensive. It should be noted that despite having a role similar to the Tiger heavy tank battalions in the German service, they are produced in far greater numbers to enforce every tank corp with one heavy tank regiment that allowed even the IS-2 to overwhelm German defenses. The IS-2 continued to see combat service for the Red Army all the way to the Battle of Berlin and the end of World War II.[1] T

After World War II, the IS-2 production was replaced by the more heavily armoured IS-3, but the IS-2 stayed in service up until 1982 due to modernization efforts on the IS-2. These modernized IS-2 were named the IS-2M and were done in the mid-1950s. These modernization efforts added external fuel tanks and stowage bins onto the hull, and protective skirts on the edges of the tracks. The IS-2 were finally placed into storage in 1990s and were kept in reserves or sold out as scrap metal.

Like most of Soviet Union's military hardware, the IS-2 was given out to the Warsaw Pact nations as supplies. The IS-2 was thus lent out to Poland, Czechoslovakia, Hungary, China, North Vietnam, and maybe North Korea. Later in 1960, a shipment of IS-2 was also sent to Cuba, these were converted into bunkers and coastal defenses as spare parts for the tank never made it to Cuba due to the US blockade imposed in 1962.