Difference between revisions of "IS-2 "Revenge"" 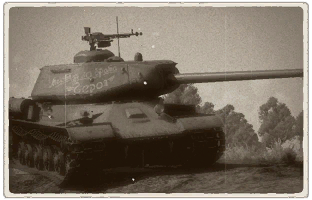 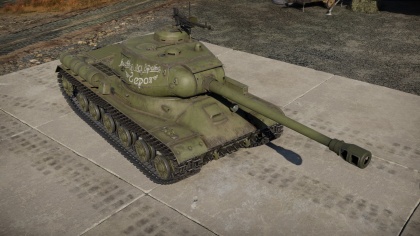 The IS-2 "Revenge for the Hero brother" (or just IS-2 "Revenge") is a gift rank IV Soviet heavy tank with a battle rating of 6.3 (AB/RB/SB). It was introduced in Update 1.49 "Weapons of Victory". The IS-2 "Revenge" is nearly identical to the IS-2 (1944), with the absence of a top-mounted machine gun for AA defence. It was discontinued after the 2018 Victory Day sales.

If a fan of the IS-2, this premium version will be to their liking. Unlike the standard IS-2 (1944) it does not have a mounted machine gun which is disappointing, but at least it does not affect its firepower against armoured units.

The IS-2 is armed with a powerful D-25T 122 mm gun that can penetrate 200 mm of armour at 10m and 158 mm at 1000m with stock ammo. The D-25T can cause massive damage and most of the time will one-shot a tank when it penetrates, though the ROF (Rate of Fire) is low due to its high reload time that will sometimes get stuck in between a rock and a hard place, but when the IS-2 is played correctly, it is a deadly opponent.

The IS-2 (mod.1944) is definitely a good heavy tank, when used correctly it is hard to penetrate when facing head-on as its frontal Armour's effective thickness is over 200 due the angle makes it a very good bouncer for any shell. Few real things to worry about are the turret ring, the right turret cheek and lower plate. Any real heavy tanker will know this. Therefore do not overexpose the IS-2 too openly. 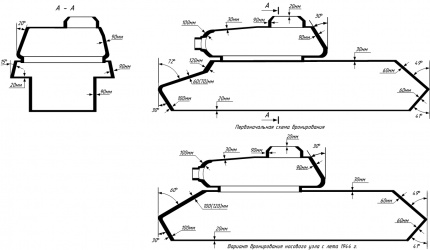 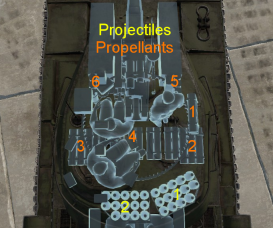 As the tank's design purpose suggests, the IS-2 is a heavy tank built with an emphasis on engaging hostile armoured vehicles as well as a breakthrough tank. The tanks heavy armour retains the similar properties of its IS-1 and previous KV line of battle-tanks but introduces some sloped armour on the front plate and turret mantlet. Differing from its IS-1 predecessor, the IS-2 comes equipped with the large 122mm D-25T gun and a slightly more armoured but elongated turret. Although powerful, the D-25T main cannon of the IS-2 is encumbered by a slow reload time, mimicking that of the Soviet Tank-Destroyer line of vehicles at around the mid-20 seconds. Nevertheless, this vehicle with its powerful cannon and shell will commonly destroy almost all but the most heavily armoured vehicles with a single shot, behaving similarly to the older KV-2 predecessor, albeit with half the time required for reloading. In the tank's Battle-Rating and Rank, the armour of the IS-2 no longer stands up to much punishment with the advent of opponents with more powerful weaponry, and caution should be taken. Close-quarters combat and brawling against more than one target at a time is highly discouraged due to the long reload speed unless the tank operator is trapped and situation requires this as an absolute necessity. Alternatively, if escorted and accompanied by other friendly tanks, the IS-2 can be supplemented and perform better in dire close-quarters situations.

The IS-2 was an evolved IS-1 heavy tank after the 85 mm gun initially mounted on the IS-1 no longer became a firepower advantage after the standard T-34 medium tank was upgraded with the same gun into the T-34-85. Due to that, the IS-1 was discontinued in January 1944 and awaited further upgrade in order to put it back into its place as the heavy tank of the Soviet Red Army.

In late 1943, the upgrade of the IS tank began and the choices available were rounded down to two weapons, the 122 mm A-19 gun and the 100 mm D-10 gun. Both guns had their advantages and disadvantages in their specifications, the 100 mm D-10 had a much better armour penetration capabilities and uses a single-piece ammunition, the 122 mm A-19 has a better high-explosive round and used a two-piece ammunition In the end, the 122 mm A-19 (adopted as the D-25T) gun was chosen as the gun of the new IS tank due to larger supply of the gun available for use (the D-10 was a newly produced gun) and the better high-explosive round available. The better high-explosive round is due to the heavy tank's specification as a "breakthrough" tank than an anti-tank role, so it was meant to fight fortifications more than against armour. Nevertheless, against armour, the 122 mm gun proved a very lethal cannon against armour, having the capacity to knock out any German tanks fielded in the war, even the Tiger II, though the ease of knocking them out vary from their armour protection.

The 122 mm gun's two-piece ammunition was perhaps the gun's worst drawback, this along with the heavy shells and charges that it uses causes reloading speed to only be one and a half rounds per minute maximum. Even after some modernization to the gun including a semi-automatic breech, the firing rate only increased to two to three rounds per minute. Another drawback of the gun was the size of the ammunition that the 122 mm gun uses, the IS tank interior could only hold 28 of such ammunition, which restricts the time the IS could last in battle before requiring a resupply. In battle, the usual distribution of the shells is 20 high-explosive and 8 armour-piercing rounds.

The finished IS tank with the 122 mm gun, first called the IS-122, was finally approved and renamed the IS-2 heavy tank, some were rearmed IS-1s from the factory with the 122 mm gun. The IS-2 tank, like the IS-1, was superior to the previous KV-1 tanks used in the Red Army. Production of the IS-2 started in October or November 1943 and by the end of World War II when production ended, a total of 3,854 units were produced.

The IS-2 tank hull was similar to the IS-1 tank, but the turret was modified to accommodate the larger 122 mm D-25T gun. The suspension was a torsion-bar suspension system and the tank was powered by a diesel V2-IC engine. The drivetrain and the engine were taken from the KV-1 tank, yet was considerably more mobile. The armour on the IS-2 was a 120 mm thick front plate sloped at 60 degrees with a small step in the front for the driver's hatch. This "early version" was produced from the initial production lines until some time in late 1944, where a IS-2 mod. 1944 version was modified with the front plate now a single sloped 120 mm plate at 60 degrees with no interruptions in order to eliminate shot traps and weaknesses in the armour design. This formidable armour is able to withstand the 88 mm shells from the Tiger I at 1,000 meters out, yet the whole tank weighs less than the Panther at only 46 tons. Despite its construction, the IS-2 was still quite crude in quality and can have signs of being hastily built from the factories. This did not affect its battlefield performance greatly and the crude construction is merely a side effect of the fast production of the tanks to fill battlefield demands.

"Revenge for the Hero Brother"

The IS-2 "Revenge" is an IS-2 dedicated to Nikolay Krasikov, a recipient of the "Hero of the Soviet Union" award. The words "Revenge for the Hero Brother" was inscribed onto an IS-2 mod. 1944 turret by Nikolay's older brother Mikhail after Nikolay was killed near Vinnytsia, Ukraine on 11 November 1943. Mikhail used his tank to fight his way into Pomerania, Germany in 1945 before being killed in March 1945.

The IS-2 first saw action in early 1944 in heavy tank regiments, each with 21 tanks. Their role was to spearhead the offensives launched at each sector, breaking through enemy emplacements and supporting the infantry by destroying enemy fortifications, they were not meant to exploit breakthroughs and this role was given to the lighter T-34 tanks. Their first reported action was in February 1944 in Korsun Chevchenkovski, Ukraine. In the span of April to May 1944, an IS-2 unit of ten tanks in the 72nd Regiment have reportedly knocked out 41 Tigers and other heavy tank destroyers for the loss of 8 tanks. The German report on the IS-2 was that it was a very dangerous tank and Heinz Guderian stated that an IS-2 should be countered by at least a platoon of Tigers and methods are devised to fire at the flanks and weak points of the IS-2 tank.

The IS-2 was also an essential part of Operation Bagration in the Summer of 1944, most notably at the Sandomierz bridgehead in August as it fought back Tiger IIs and Panthers. Another battle with the 71st Heavy Tank Regiment had 11 IS-2s fight back a force of 14 Tiger IIs from the 501st Heavy Panzer Regiment at the range of 600 meters. At these ranges, the only advantage the German tanks had over the IS-2s were its faster reloading rates compared to the two-piece ammunition used in the 122 mm of the IS-2. The IS-2 then saw service in fighting in Hungary, where they took on more Tigers and Panthers, and finally in the final battle at Berlin, where the 122 mm cannon proved very effective in destroying fortified buildings housing the enemy troop. Despite their heavy armour, the IS-2 in Berlin suffered a loss of 67 tanks due to the prevalence of Panzerfausts in the German troops, which are able to easily penetrate the IS-2's thick armour.

After World War II, the IS-2 production was replaced by the more heavily armoured IS-3, but the IS-2 stayed in service up until 1982 due to modernization efforts on the IS-2. This modernized IS-2 was named the IS-2M and were done in the mid-1950s. These modernization efforts added external fuel tanks and stowage bins onto the hull and protective skirts on the edges of the tracks. The IS-2 was finally placed into storage in the 1990s and were kept in reserves or sold out as scrap metal.

Like most of Soviet Union's military hardware, the IS-2 was given out to the Warsaw Pact nations as supplies. The IS-2 was thus lent out to Poland, Czechoslovakia, Hungary, China, North Vietnam, and maybe North Korea. Later in 1960, a shipment of IS-2 was also sent to Cuba, these were converted into bunkers and coastal defences as spare parts for the tank never made it to Cuba due to the US blockade imposed in 1962.

The 1944 model of the IS-2 with a straightened frontal component. The tank bore the inscription “Revenge for the Hero Brother.” The inscription was dedicated to Nikolai Maximovich Krasikov, a Hero of the Soviet Union. It was inscribed on the tank’s turret by Nikolai’s older brother Mikhail. Nikolai was only 17 when the war began. He decided to follow in his brother’s footsteps and become a tank operator. After completing The Armor School in 1943 Nikolai fought on the Voronezh and 1st Ukrainian Fronts and distinguished himself in the battles of the Kiev Strategic Assault. He and his crew were among the first to break into the Liutezh settlement, where he disabled one tank, destroyed two cannons, and eliminated up to 40 enemy infantrymen, laying a path for the offensive with his decisive and brave actions.

In the Novo-Petrovtsi settlement he destroyed four cannons and eliminated 18 enemy soldiers and officers while taking the elevated ground. During the battle on the right bank of the Dnepr the crew of his tank destroyed one enemy tank and eliminated 20 soldiers, then covered the Soviet infantry as they crossed the river. Two days later Guards Lt. Nikolai Krasikov’s tank was the first to break into Vyshgorod, where it destroyed three cannons and eliminated 25 enemy soldiers. During the same battle he led two tank companies from the surrounding area and saved the commander of the adjacent company.

The commander of the 48th Heavy Tank Guard Division lost his life on November 11, 1943 in the battles for Vinitskie Stavni. He was posthumously awarded the title of Hero of the Soviet Union. After his brother’s death Mikhail Krasikov wrote “Revenge for the Hero Brother” on his tank and fought in it in battles ranging from Ukraine to Pomerania.