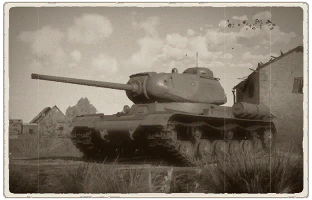 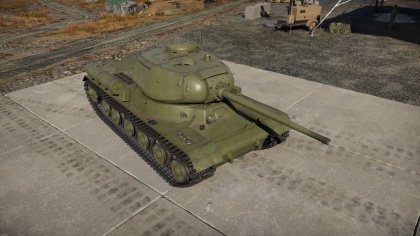 Operational and visual characteristics of the IS-1 retain the visual and operational similarities to the previous KV line of heavy tanks of which it is descended from. Players experienced in operating previous models of the KV series of tanks should have little to no difficulty in adjusting to this vehicle. Unlike its predecessor, the IS series of tanks are designed with a priority of engaging enemy armoured vehicles in mind and as such, come with increased yet more sloped armour than its KV predecessors whilst sporting a slightly longer chassis, more powerful 85mm D-5T gun and a larger, rounded turret. 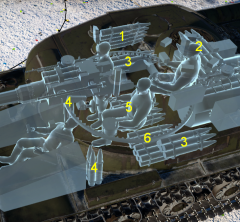 As the tank's design purpose suggests, the IS-1 is a heavy tank built with an emphasis on engaging hostile armoured vehicles as well as a breakthrough tank. The tanks heavy armour has similar properties of its previous KV-1 line, but the introduction of sloped armour on the front plate and turret mantlet can allow operators to withstand a significant amount of damage at most ranges, especially when armour is angled. The fast reloads speed of the 85mm gun (on par with its T-34 and KV-85 mounted sisters) also allows it to be an effective brawler in close quarters combat against multiple targets. When encountering better-protected targets, the IS tank (although equipped with the same type of cannon) has access to APCR rounds to better deal with more heavier opponents, something the KV and T-34 models lack.

Another significant note of this vehicle is its considerably fast reverse rate, the highest of its Rank and Battle-Rating for the nation's faction, topping at 17 km/h. During situations where close-quarters engagement is expected, an unorthodox strategy can be utilized when the operator of the IS tank re-positions the vehicle 90 degrees and drive in reverse towards the enemy. By driving in reverse with the rear facing the opposition, the engine blocks make a crude yet somewhat effective shield and protecting the more delicate crew. As the fuel tanks are mostly stored at the front on the left and right side of the driver's station, the risk of fire and fuel-tank explosion is reduced significantly (but not completely eliminated) and thus, the tank is able to resist even the most powerful of shots. Be aware that more experienced players may attempt to instead fire at the more exposed turret of the IS tank and instantly knocking out the crew with a common APHE penetrating the shell.

When engaging the common Tiger tank and Panzer IV models, each of these vehicles retains the design flaw of 90 degree flat armour plates on the front and sides of each respective vehicle. The IS-1's 85mm cannon should have little no difficulty in penetrating this and destroying the opposition's vehicle in a single shot if this weakness is exploited. The Panther and occasional Tiger II models are more considerably dangerous and difficult to dispatch when encountering them head-on due to the thicker and sloped armour of which the 85mm cannon of the IS-1 cannot penetrate. In head-on engagements, operators of this vehicle should note to precisely target the right and left side turret mantlet of each respective vehicles instead. Time expended in attempting to find a penetration confirmation indication on the cross-hair when inspecting the sloped front plate is time wasted and instead, should be diverted on precise targeting of the mantlet. Other more common tanks such as opposition USSR KV, IS and T-34 models are usually less of a concern than the common Panther tank, as most of these respective tanks also inherit the weakness of somewhat slopped frontal chassis and turret armour which can be easily penetrated even from significant distances with a precise aim.

The IS-1, like the KV-85 before it, was a great assist to the Soviet tank forces, giving them a heavily armoured tank with a great 85 mm gun that could defeat most of the German tanks in service except their heaviest ones such as the Tiger I and the Panther tanks. The IS-1 was issued to Guards Heavy Tank Regiments for service, most notably the 1st, 8th, and 13th Guards Heavy Tank Regiments which saw service in Ukraine and Slovakia. Within a standard IS-1 issue tank, there were often 59 85mm rounds and 2500 rounds for the three DT machine guns, which allowed it to have both superior armaments and capacity compared to the standard Tiger I.

The IS-1 was developed in the spring and summer of 1943 by factory No. 100's design bureau led by Z.Y. Kotin. The tank's hull design and overall layout were taken from the previously developed experimental KV-13 tank.The main priority was creating reliable protection against the German 88 mm Flak 18 artillery cannon and making considerable mobility improvements by reducing the tank's mass and introducing a new epicyclic gearbox. The results of battles in 1943 revealed the need for a new heavy assault tank to replace the outdated mass-produced KV tanks. The prototype, designated IS, was built, tested and put into service in the Red Army in July-September 1943. Thanks to its new gearbox and the more streamlined placement of its strengthened armour, the new tank possessed superior mobility.