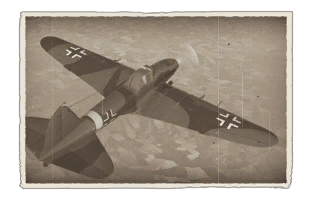 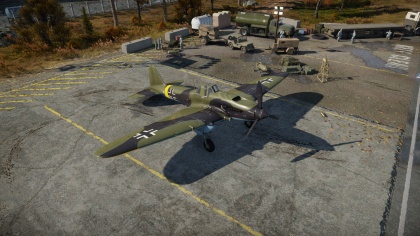 The Aircraft has an inadequate Engine and Cooling system, and as such, is slow and has a tendency to try to hit the ground. Air speed bleeds off easily, and climbing is close to impossible.

Known as the "flying tank" in the second world war, The Il-2 has a Steel "armored bathtub" around the cockpit and engine, with an average thickness of between 4-6 mm. It's front windscreen however is made from armored glass, totaling 64 mm, with it's side+Rear windscreens offering no protection whatsoever. Behind the cockpit is a 12mm section of steel armor.

German ace Erich Hartmann recalled "an Shturmovik IL-2,which was the toughest aircraft to bring down because of the heavy armour plate. You had to shoot out the oil cooler underneath, otherwise, it would not go down". Receiving damage to your oil or water coolers is usually fatal, as it will cause your engine to under-perform and eventually cause your demise. The tail area is especially weak, and can be ripped off by enemy fire. The Aircraft's engine is inadequate, as is the cooling system;as such, using WEP with this aircraft is not recommended.

The Il-2(1942) can be outfitted with the following external ordinance:

In Air RB, this aircraft can devastate entire columns of enemy Tanks and soft targets with ease. The Plane's 23mm cannons Armored rounds will make easy work of enemy medium tanks when attacking from the sides, and can sometimes aswell from the rear, though this seems to take more ammunition. It's recommended to use bursts when dealing with enemy armor. This aircraft can also excel in head-on attacks by enemy fighters, if needed for defensive actions. If using this plane with a squad of German Il-2s, one *could potentially form a makeshift "circle of death", with each plane circling while covering the squad-mate ahead of them. If being attacked from behind, reducing power and flying low to the ground *may cause the enemy fighter to overshoot into the player's firing zone.

The Main threats to the Il-2 are enemy AAA and SPAA weapons, the occasional Allied attacker (A-36) and once they've arrived, enemy fighters. Most of the time the Il-2 can win a Head-on with enemy fighters, however once an enemy climbs, usually the il-2 player is doomed.

As this plane is premium, all modules are already researched and purchased.

For History, See Il-2(1942): This Particular Il-2(1942) was originally marked as Red/White 4 of the Soviet air force and was captured by the Germans on the Eastern front. The aircraft's paint scheme suggests it was most likely built at Zavod 18, as it is typical of paint schemes from this particular factory. All weapons were removed (and later reinstalled) and all markings were painted over, with the addition of a Yellow band being painted in-front of the tail section and under the tips of the wings. Of note is the lack of the inclined Swastika which was present on the original.