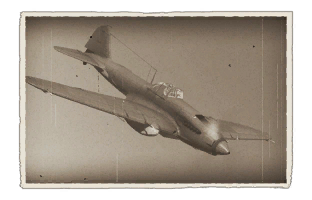 The IL-2 1941 is the first IL-type attacker a pilot will get in the Soviet aircraft tree. Players will quickly find out that this plane is very durable, but somewhat slow and unwieldy... although with some skill this plane can surprise attacking enemies. Players should research bombs and rockets as soon as they can, followed by ammo belts to augment your ground-attack role. This plane, as well as the following IL-type aircraft, have roughly the same base attributes you will find in the Pros and Cons below, with a few minor differences between models.

The IL-2 (1941) can be outfitted with the following ordnance:

For tactics, IL-2s are built to be close to the ground. Fly very low for IL-2 pilots in reality were known to skim treetops. Further try to stay out of sight of enemy planes. As tough as you are, you cannot take concentrated fire from enemy fighters, especially heavy fighters. As you near your target (about 3 km away) go into a slight climb, then nose down into a moderate dive toward your target. Imagine yourself gliding in, not diving. It is generally recommended that you use bombs first, as this will immediately lighten the plane and make you more maneuverable. Because the IL-2 flies so close to the ground, some pilots have destroyed themselves by bombing targets right under them. To avoid this, set the bomb fuses to around 2 seconds.

Use bombs against tanks and pillboxes, rockets against groups of light armored vehicles (and occasionally enemy aircraft), and use your MGs/Cannons for AAA, Artillery, Armoured cars, and enemy aircraft. If you equip certain ammo belts, you may also be able to destroy pillboxes and light tanks with your primary guns alone! Experience gained with this aircraft will be invaluable for later models, who get larger cannons, rear gunners, and other handy upgrades.

Lastly, due to the extraordinary low-altitude style of the IL-2 line of planes, equipping a camouflage that matches the map actually helps in the Realistic/Simulator modes, as you need to get close to enemy planes before they become "spotted". Equipping a white camo on a winter map, then flying very low as the IL-2 is made to do, can help keep players from spotting you. Remember that player-made skins are not seen by other players, so you have to choose between the ingame skins.

The famous IL-2 Sturmovik was a Soviet WWII-era attack aircraft created by the Ilyushin Design Bureau and nicknamed Hunchback by Red Army troops due to the distinct fuselage shape. While the designers nicknamed their aircraft the Flying Tank, Luftwaffe pilots, due to the IL-2's incredible ability to withstand battle damage, instead called it the Betonflugzeug (Concrete Plane). German ground troops, conversely, despised and feared the IL-2, giving it a slew of unpleasant nicknames, such as Schlachter (Butcher); Fleischwolf (Meatgrinder); Eiserner Gustav (Iron Gustav) and Schwarzer Tod (the Black Death). Some historians believe that the Black Death was actually a successful invention of the Soviet propaganda machine that caught on with the Germans.

The IL-2 was the most mass-produced military aircraft in history. However, early in the war German air superiority coupled with the absence of rear gunners on early variants and poorly organized Soviet fighter escorts led to high rates of losses for the type. A favourite attack tactic for IL-2 pilots was a low-level attack run, first letting loose with rockets at 600-700 meters, then firing on-board armament from a distance of 400 to 600 meters. Bombs would be dropped in subsequent passes from an altitude of 100-200 meters, using an impact fuse. The recommended tactic for attacking concentrations of soft targets was a strafing run in a shallow dive from 100-200 meters and a subsequent dropping of bombs at a low level when exiting the dive.