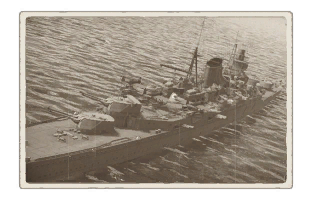 The IJN Mogami is one of the most well protected cruisers in the game, with 140 mm of RHA covering the entire front and rear ammunition stowages, 100 mm of RHA protecting the engine compartment, 105 mm of RHA bulkheads. The ship has 910 crew which is just decent for a 15,000 tons heavy cruiser. The only downside of this ship is its extremely thin (25.4m m) turrets armour so users will have a hard time doing close range engagement.

The ship can reach its max speed of 64 km/h, with the complete rudder's turning time of 4.05 seconds (aced crew)

The ship is fitted with four turrets of dual 5 inch/40 Type 89 cannons.