Difference between revisions of "IJN Kako" 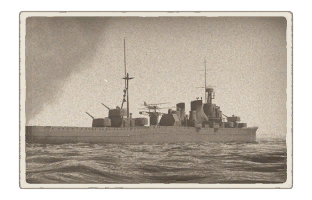 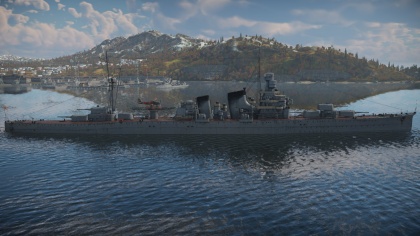 Created as a counter to the American Omaha and British Hawkins class cruisers, the Furutaka class was designed to act as a scouting cruiser capable of protecting the main fleet from enemy scouts. While the ship was designed before the Washington Naval Treaty, she still fell within the displacement and calibre limits with 7,500 tons of displacement and the main armament of six 7.9 in/20 cm cannons mounted in single turrets; she also had a torpedo armament of 12 x 21-inch torpedo tubes mounted in the hull. These armaments would change as both Furutaka and Kako were modernized shortly after being completed, with their single mounted guns being replaced with three twin turrets and two quad-torpedo launchers being added near the aft.

During the first months of the Pacific War against the United States, Kako was assigned to Sentai 6 and tasked in covering the invasions of several islands including Guam, Wake, and New Guinea. Sentai 6 was then assigned to Operation MO, the invasion of Port Morseby, and partook in the Battle of the Coral Sea on May 7, 1942. Their next major action would not be until August, but would also be their largest. Kako and Sentai 6 had been assigned to the new Eighth Fleet. In response to the American invasion of Guadalcanal, the Eighth Fleet sortied out to counter the invasion force. On the night of August 8-9, 1942, Kako and the fleet of 4 heavy cruisers, 2 light cruisers, and a destroyer surprised the Allied Fleet in a night attack off Savo Island.

Fighting at close ranges with searchlights, flares, and star shells, Japanese naval artillery devastated the Allied fleet, sinking 4 heavy cruisers and forcing the American support ships to abandon the Marines on the island. While the battle was a stunning victory for the Japanese, they failed to sink any of the landing ships and fled the area for fear of retaliation from American carrier planes; However, it was the American submarine S-44 who got revenge. On August 10, while the Eighth fleet was returning to Rabaul, the S-44 fired four torpedoes at Kako, scoring three hits. The Kako quickly took on a list before her boilers detonated, sinking the cruiser but only taking 68 sailors with her. Kako was struck from the Japanese Naval list a month later.