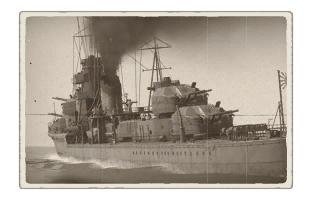 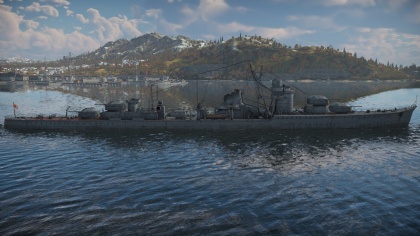 The Akizuki-class, IJN Akizuki, 1944 is a rank III Japanese destroyer with a battle rating of 4.7 (AB/RB/SB). It was introduced in Update 1.89 "Imperial Navy". This is a final researchable destroyer in the Japanese tree and it is one of the best destroyers for players to play with.

There are a total of eight 100 mm guns in four twin turrets, a pair super-firing forwards and a pair super-firing aft, for a total broadside of 8 guns. The guns have a relatively high rate of fire, reloading in about 3 seconds (for a skilled crew; base reload is still within 3-4 seconds).

Both shells have a maximum penetration of 44 mm at 100 m, 36 mm at 1,000 m, and 13 mm at 5,000 m, which is usually the optimum engagement range for Destroyers. Both rounds only contain 950 grams TNT equivalence, which is the second-lowest of any HE rounds found on destroyers. However, due to the high rate of fire and the number of guns, the amount of TNT per minute that Akizuki can send downrange is comparable or even surpassing that of 5-inch armed destroyers. These shells also have the fastest muzzle velocity of any destroyer with 1,000 m/s, making them relatively comfortable to aim at medium and long ranges.

The turrets traverse relatively quick as opposed to ships preceding Akizuki. The guns have a maximum elevation of 89° and can depress to -10°. Each main turret has an ammunition capacity of 400 shells at maximum load, for a grand total of 1600 shells. Main ammunition magazines are below the waterline, so they have a relatively low chance of being hit.

Akizuki is unarmored and relatively large for a destroyer. While the 100 mm shells are relatively weak on their own, the fast rate of fire means Akizuki can send more TNT downrange than most other destroyers, making her reload rate her greatest asset. Try to avoid any damage if possible as repairing, extinguishing fires, and pumping out water all incur a heavy penalty to reload rate. Akizuki is best played passively either at long ranges, where her fast muzzle velocity can shine or behind cover in an ambush role, where her quick rate of fire can easily shred enemy destroyers.

Against destroyers and other unarmored targets, Akizuki is monstrous. However, Akizuki is wholly inadequate for dealing with armoured targets. She has no access to any kind of armour-piercing rounds or even base fuse HE, so she cannot fight light or heavy cruisers at all, aside from lightly armoured cruisers like USS Trenton and USS Raleigh. This forces Akizuki to be played in a supportive role behind cover, where she can more effectively fight other destroyers and PT boats. Playing behind cover also increases her chances of being able to ambush cruisers with the Type 93 torpedoes. Be aware though that Akizuki has poor manoeuvrability for a destroyer; reacting to close range PT boats and torpedoes can be difficult.

Other threats to Akizuki include later US destroyers, like USS Allen M. Sumner (DD-692), USS Fletcher (DD-445), and USS Somers (DD-381) because of their armored hulls and ability to match Akizuki's rate of fire with far more damaging guns. Against such foes, it is best to target their turrets (especially for USS Allen M. Sumner (DD-692) and USS Somers (DD-381)) since they are large and only lightly armoured.

The historic role of the Akizuki was providing AA cover for carriers. Carrying some HE-DF rounds together with the cannons can provide some significant anti-air cover for the team. Especially when playing a more supportive role as described above and keeping a distance from the enemy fleet.