Difference between revisions of "IAR-81C" 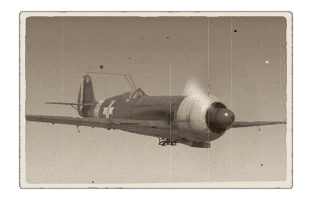 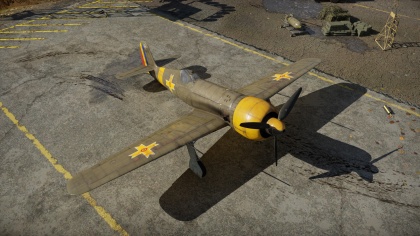 The IAR-81C is a premium rank II Italian fighter with a battle rating of 2.7 (AB/RB/SB). It was introduced in Update 1.79 "Project X". It is the first domestic-produced Romanian plane in the game, added into the Italian tree.


This variant is the up-gunned version, designated 81C and it excels at ground support. Boasting good offensive firepower and decent payload options for a converted fighter, the IAR-81 is capable of multiple roles. Harassing enemy ground forces only to follow up by securing the air space is among tactics typical for this type of fighter. While there are no obvious shortcomings to this fighter, neither does it excel in any category. The combat role flexibility is a force multiplier especially on early maps as it opens another crew slot for specialist vehicles.

On paper the IAR-81C looks to be a Bf 109E clone. Though looks can be deceiving. This vehicle feels far heavier than it really is. Cause for this is the early starting lock-up of the elevator at high speeds and the lack of leading-edge wing slats at low ones. Flaps use is essential, but slows down the plane very much in using so. Turn characteristics are average which can be said for most of its statistics. Although it lacks the horsepower to accelerate ones coming out of a manoeuvre. Despite the elevator lock-up above 400 kph, the IAR-81C is an excellent Boom & Zoom fighter. The sleek design, the terminal velocity of 680 km/h IAS and the late break-off speed for the flaps all greatly help. The latter especially is of use to tighten the recovery from dive attacks, ensuring that even at high dive speeds the flaps can be deployed.


A bit cumbersome the IAR-81C takes about 20 seconds to take-off from a standstill, especially with a payload onboard. A hard Split-S without the combat flaps is a dangerous affair thanks to the elevator locking up and will take about 460 m to perform. The Immelmann should be reserved for a better accelerating fighter for this plane is not a fan of it. A high Yo-Yo is preferable. Climbing should be done at 15° and between 250 and 270 km/h (240 f/s), though a stable climb is possible at 150 km/h, too.

If one were to hit the pilot from the front, the enemy would need to pass through the engine block, the oil filter and one of two big fuel tanks. Engaging bombers or head-on attacks are well-nigh saved bets for the pilot. Further the fuselage inline fuel tanks are consequently safe from pursuit and frontal fire. The rearward protection is not as stellar though. The decently thick steel plate does not protect the entire pilot, leaving the lower back open. Overall a sturdy little fighter for its rank.

The IAR-81C packs a considerable punch for its battle rating, including two MG 151's and two 7.7 mm machine guns for a total of 3.11 kg/s. Naturally, the MG 151's found on this aircraft gain access to the powerful Minengeschoß shells, making the vehicle a deadly force to be reckoned with for what it can face. The 7.7 mm machine guns found on this vehicle are adequate at best and provide the best effect when used with tracer rounds to provide more effective aiming when using stealth belts for cannons.

A big downside is the wing-mounted position of all firearms. This location drastically lowers the firing density and brings with it the issue of gun convergence. In short, the convergence/crossing point is were the fire lines of each gun meet and close this imaginary triangle. For ground strafing the gun convergence should be set as high as possible, for the distance of engagement varies on the approaching run. For dogfights, a range from either 100 to 300 m is common to bring all guns in the crossing section to bear.

The IAR-81C can be outfitted with the following ordnance:

Where this vehicle really shines, however, is its access to a ground-pounding loadout of a 250 kg bomb and 2x "Werfergranate 21" rockets. Although created for anti-bomber use, the Wfr.Gr.21 rockets are capable of shredding tanks it faces at its battle rating or above, penetrating even a tank's side armour with a near-miss in some scenarios. With powerful HE shells for its cannons to demolish open-topped vehicles, a 250 kg bomb on a "trapeze"-style mount like those found on the Ju 87-series aircraft, and Wfr.Gr.21 rockets for engaging fast-moving tanks or more armoured anti-aircraft vehicles from a distance (namely the Crusader AA Mk I or the AC Mk II AA), the IAR-81C provides the Italian tree with a vehicle that poses a serious threat to all but the most armoured vehicles or cautious anti-air.

With the advantage of flexibility, a mode of attack should be chosen before spawning. Climbing at the start to fight for air dominance with allies, or going full ground support with the option to defend oneself upon being spotted. Perhaps even taking ordnance for a quick drop only to retreat behind allies to initiate a late climb to dogfight altitude. The options are all there, however in-game a fighter first and ground support second is more often than not welcomed by the team. In combined Air & Tank Battles the multi-role nature of the IAR-80C is a great fortune as one can swap between ground support and air supremacy at one's leisure.


For dogfighting Boom & Zoom is the favourite combat style of the IAR-81C. While it is quite nimble in a turn, it lacks the engine performance and low stall speed for a continues turn fight. Horizontal and hard manoeuvres are more for emergencies.

After fulfilling several governments and licence contracts, the relatively young I.A.R. (Industria Aeronautică Română) company had enough resources and technical know-how to begin developing their own fighter aircraft. Taking inspiration from previous licenced projects, I.A.R. engineers initiated a private venture by beginning work on their own fighter aircraft in late 1937, which would later be known as the I.A.R. 80. As work was progressing slowly, the first prototype wasn’t completed until spring 1939. Initial testing produced positive results, proving that the I.A.R. 80 could be considered a modern fighter despite not matching the performance of contemporary Bf 109s and Spitfires. After addressing some minor issues and upgrading the prototype’s engine, the I.A.R. 80 was tested in a head-to-head competition with the German He 112. Impressed by the aircraft’s display, the Romanian government placed an order for 100 I.A.R. 80s to be produced, while only a limited number of He 112s were ordered for production. Despite starting production almost instantly after the order was placed, I.A.R. struggled to ramp up production as shortages on the Belgian-made FN Browning 7.92mm machine guns became an increasing issue in the wake of the German invasion of the Benelux states. By April 1941 however, with Romania joining the Axis, the armament shortages were temporarily addressed. Taking advantage of the opportunity, I.A.R. upgraded their fighter to the I.A.R. 80-A, increasing the number of machine guns to the initially proposed six and installing a more powerful engine, thus solving many initial concerns with the aircraft.

Even prior to Romania’s entry into WW2 in 1941, the government was keen on modernizing their stock of strike aircraft and dive bombers. The latter role was to be filled with the Ju 87 Stuka. However, as Germany initially refused to permit a licence production, I.A.R. came up with the proposal to convert some I.A.R. 80 fighters into dive bombers, creating the I.A.R. 81. These machines differed only from fighter models in the installation of a bomb rack underneath the fuselage, capable of suspending a 225 kg bomb. The I.A.R. 81-C was the final modification of this series, featuring upgraded MG 151/20 20mm cannons compared to previous versions. Around 150 examples of this modification were produced out of the approximate total of around 350 I.A.R. 80/81. By the end of the war, most of the I.A.R. 81s were not used in the dive bomber role and were instead used side by side with the I.A.R. 80 as fighters, most notably taking part in the famous defence of Ploesti against U.S. bombing raids in 1944. I.A.R. 80s continued their service with the Romanian air force after the end of WW2 and even into the early 1950s, before being replaced by more advanced Soviet counterparts.[1]