The Type 89b I-Go Ko is a reserve rank I Japanese light tank with a battle rating of 1.0 (AB/RB/SB). It was introduced in Update 1.65 "Way of the Samurai" along with the rest of the initial Japanese Ground Forces Tree. The I-Go Ko is a quite average starting tank, not being absolutely awful but not exactly great either. The tank's armour is virtually non-existent, the engine has good acceleration but caps out at 27 Km/H, and the gun has decent APHE rounds but with less penetration than the 37mm Type 94 - the only round really worth using is the HEAT round, which perform substantially better. Even so, the gun does have considerable drop-off, so take care when aiming. All in all, the tank is a jack-of-all-trades, master of none for Rank I. It's not great but it could be worse. At least it's not as bad as France. 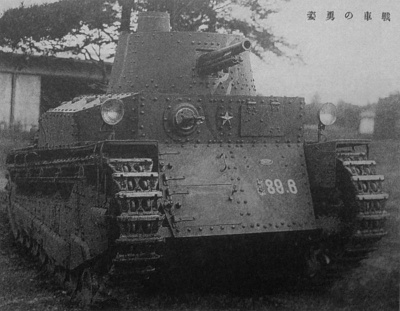 The Type 89b I-Go Ko, despite its rather sluggish looks, is a mobile tank that could use its speed to get to an enemy's flanks and cause some serious damage. The 57 mm cannon is unfortunately rather pitiful even in Rank I, with a penetration value of between 20 to 30 mm at standard combat ranges. Thus, it is best to catch an enemy by its sides in order to get through their weaker side armour. The 57 mm low-velocity shell does have an advantage of a rather prominent parabolic trajectory so it is possible to lob shells over hills to hit unsuspecting enemies behind it. This, fortunately, has changed with the addition of a High Explosive Anti-Tank (HEAT) shell which is available for this vehicle and all Japanese tanks that use the 5.7cm Type 97 cannon. This shell has 55mm of penetration at any range, but still has considerable drop-off due to the low-velocity of the gun. It's a good enough anti-everything that can penetrate most targets you will meet, especially those pesky French tanks, which tend to be quite well armoured. The Type 3 HEAT shell fortunately has just enough penetration to get through them, although one should always try to aim for weakspots and never assume that you will penetrate no matter what. You never know when you'll get Gaijin'd.

Pretty much everything is a threat to this vehicle. Fast vehicles (BT-7, BT-5, M2A1, Tetrarch, T-60) in particular are an uneasy encounter: The I-Go is reasonably fast at close quaters, but not that fast. At close range, the I-Go's poor turret turning speed cannot follow the movement and at long range, the slow shells are a pain to aim precisely at a moving target - especially seeing as the 45mm 20-K that virtually every Soviet vehicle at this BR has can easily kill you at any range with a well aimed shot. Autocanons (72-K GAZ AAA, Pz. II, Flakpanzer, Gepard, M13, T17E2, etc.) are the I-Go Ko's worst nightmare since they can make mincemeat of the armour in seconds without too much efforts. Plus, they are often quite fast.