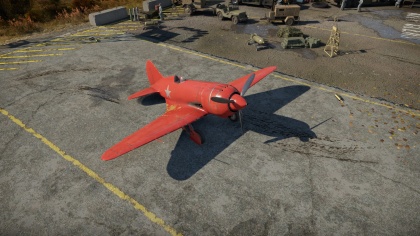 The I-180S is a premium rank II Russian fighter with a battle rating of 3.0 (AB/RB/SB). It was introduced in Update 1.87 "Locked On" during the "Battlefield Engineer" event.

Climb to about 4,000m - 5,000m of altitude at the beginning of the battle, use Boom & Zoom tactic to get rid of some enemies low first. If there are any enemies above or as high as you, try to drag them into a dogfight. Remember to always avoid head-on attacks when against some heavy armed planes such as the F4U Corsair variants, P-40s and Fw 190s.

There are also some enemies you really have to pay attention to, specifically the British Spitfires and Japanese A6M. Both of these fighter types have a very good turn rate, which means dogfighting even against a mediocre pilot will most likely result with them on your tail. Remember when fighting against them the Spits and Zeros, try to gain an altitude advantage or do a head-on with a quick snap-turn and out-run them.

Development of the I-180 began in 1938, with the Polikarpov design bureau starting work on creating a new aircraft to meet the requirements of the Soviet Air Force at the time. In order to do so, engineers decided to base the new machine on a modified I-16 design and to install a more powerful radial engine. As a result, the I-180 was created. However, development and testing of prototypes was plagued with numerous issues, including many accidents. This, coupled with the arrival of new Soviet fighter designs quickly cast a shadow on the I-180 project which ultimately led to the project being cancelled by the end of 1940. Prior to the cancellation, a production version of the machine - the I-180S - was built but only in very limited numbers. In total, around 13 I-180s were built, including prototypes, but none saw any active service.