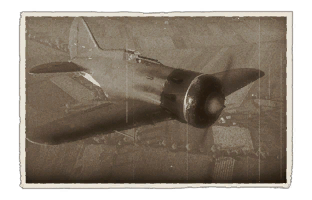 The I-16 Type 5 is the earliest instalment of the Polikarpov I-16 family available in the game. A rather solid if somewhat temperamental pre-war fighter that, while extremely dangerous if used right against biplanes and other pre-war fighters, can get in quite a struggle to deal with later aircraft such as the Ki-43-I and the Hurricane, and being wholly overmatched by aircraft like the Spitfire Mk Ia and the Bf 109 E-1.

The I-16 Type 5 is equipped with two wing-mounted ShKAS machine guns chambered with the 7.62 x 54R cartridge, a cyclic rate of fire of 1,800 rpm and with an ammo loadout of 900 rounds each.

Since both machine guns are mounted pretty far apart, they are more effective at convergence range which, being rifle calibre machine guns should be set to a relatively low distance (from 150 to 400 meters). The weapons have a rather standard firing time of 30 seconds and had a very high throw for a rifle calibre machine gun due to its very high rate of fire. This particular feature makes overheating a pretty big problem, so it is recommended to fire the weapons in short burst since the jamming of one of them would result in the loss of half of the aircraft's effective armament. It's also of note, particularly in Simulator Battles, that the I-16 Type 5 modelled in-game is fitted with the original-for-the-type enclosed cockpit and OP-1 telescopic sight which may prove problematic for players who are not fond of telescopic sights for aiming. The I-16 Type 5 low weight, high roll rate and somewhat unstable centre of gravity make it a slightly inaccurate gun platform, though its high roll rate and pressure of fire somewhat mitigates its effects.

As for the armament effectiveness it can be considered of moderate power against most fighter aircraft at its rank, it can be quite complicated to kill an enemy in a single glancing attack and sometimes it would take quite a bit of time to finish a particularly resilient foe, incendiary ammunition or Stealth belts can be very helpful for boosting the lethality of the planes armament. Against bombers however, the armament loses a lot of its effectiveness with only shots to the pilot's cockpit or the engines proving somewhat effective and even then normally taking several hundreds of bullets to bring them down.

The I-16 Type 5's biggest asset is its versatility. This aircraft is considerably faster than most biplanes which allows it to use superior speed (both in level flight and in dives) and energy to engage them safely, while at the same time it can outmanoeuvre a lot of its faster opponents if not by turn rate at least by using its breakneck roll rate. It also has a significantly fast climb-rate of over 14 m/s to up to 3,000 meters which is only beaten at its battle rating by Bf 109 E-1/F-1's, Spitfire Mk I's and by the Ki-27/43/44. As previously mentioned the plane has a phenomenal roll rate of up to 150°/s. On the other hand, the roll rate can under some circumstances cause the plane to lose control, particularly while performing high G pull ups after recovering on a dive which in some circumstances may prove fatal.

When confronting slower but more manoeuvrable planes, energy tactics are to be favoured over turning and burning, in contrast when facing faster monoplanes the use of horizontal manoeuvres, particularly the use of scissors due to the aircraft rapid roll rate in a combination of short vertical movements such as Immelmanns and chandelles. While the plane's light weight means that it is relatively slow at building up speed in a dive and also causes it to have lacklustre energy retention for a monoplane. Even though pairing this aircraft with a rather powerful engine helps to alleviate this shortfall, the aircraft can initially out-accelerate planes which otherwise outperform it in the speed department.

Your biggest threat when flying the I-16 Type 5 comes from aircraft with a significant top speed advantage (like the previously mentioned Spitfire Mk Ia and Bf 109 E-1) as well as from low rank Japanese monoplanes. Against the former your best chance is to use defensive tactics and hope that they make a mistake or an ally comes to your aid, rolling scissors and sudden changes of direction through rolling the plane axis are the most effective evasive manoeuvres for this particular plane. Against the latter, the tactic would depend on the specific model you encounter. When flying against the Ki-27, the use of rolls is the most desired if not a nigh obligatory form of evasion. There is minimal chance to turn out or outrun the Ki-27, but you can out-roll it, particularly at high speeds. On the other hand, zoom climbs are a bit of a mixed bag. While the Type 5 sometimes can get away with it through its superior power-to-weight ratio, the Ki-27 has a much lower stall speed which sometimes allows it to stay all the way through the zoom climb with early I-16's (later, heavier variants of the plane are more effective at using this tactic). Against the Ki-43 things become quite complicated since the Ki-43-I and the Type 5 are pretty well matched in roll rate (where the latter has a slight advantage) and turn rate (where the former has a slight edge), a combination of turns and rolls is the best way to evade the Ki-43's though it has to be done carefully in order to be effective, the latter Ki-43-II with its considerably higher top speed but reduced manoeuvrability is confronted more effectively by use of horizontal manoeuvres while trying to prevent it from reaching high rates that would allow it to use energy tactics against you.

The I-16 Type 5 is not a very effective interceptor, not being much faster than most monoplane bombers in its rank while having both a rather weak armament and protection.

Development which started from the early I-16 Type 4, the I-16 Type 5 was the first version of the I-16 to incorporate the M-25 engine (which produced 700 HP in contrast with the previous M-22 engine that produced just 480 HP) and receiving ShKAS machine guns in place of Type 4's slower firing PV-1's. Testing of the new power-plant in the I-16 airframe started in October 1935 with serial production of the aircraft starting in early 1936 and continued up to late 1937. Throughout its production, several changes would be done to the production model using the feedback obtained by the operational and combat experience through 1936-1937, most notably the removal of the sliding canopy in favour of an open cockpit and the addition of the PAK-1 reflector sight in place of the older OP-1 telescopic sight. It was substituted in production by the I-16 Type 10 and by that time over 2,000 units were produced.

By mid 1936 the I-16 Type 5 had just begun to be put into service with several units of the VVS when the Spanish Civil War broke out. After receiving an economic loan from the Spanish Republican government, the Soviet Union started to supply the government forces with war equipment and resources to oppose the fascist supported Nationalist. The first batch of I-16 Type 5's were deployed in November 1936. The I-16 Type 5 would soon prove to be a formidable aircraft being easily able to intercept the Ju-52 utility/bomber aircraft while proving superior to the German He-51's deployed by the Condor Legion. At the time only the Italian built Cr.32 stood a chance against the Soviet monoplane fighter due to its superior armament, manoeuvrability and excellent dive performance, the Republican Air Force would soon start to refer to them as "Moscas" (Fly) while the Nationalists nicknamed it the "Rata" (Phonetic transcription; the engine sound was similar to a sewing machine). The I-16 Type 5 did however show some issues including limited cockpit visibility, unreliable armament and a tendency to suffer structural damage when flying at high speeds.

In 1937 the Condor Legion had started to deploy its first models of Jumo powered Bf 109's as well as their first high-performance levels bombers like the Ju-86 and the Do-17. The early Jumo powered 109's, and I-16 Type 5 were well matched, with the Bf 109 B having a slight advantage in top speed, performance at high altitudes and in dive performance, while the I-16 boasted superior manoeuvrability, power to weight ratio and climb-rate, both aircraft had comparable armament. Although superseded by the I-16 Type 10 by 1938 some models of the Type 5 variation would stay in operational service until the end of the Spanish Civil War and would remain operational service by the Spanish Air Force up to 1953.

The I-16 Type 5 also played a crucial role during the initial stages of both the battle of Khalkhin Gol and the Winter War, by the time the aircraft had started to show its age and were generally considered inferior to the Ki-27 fielded by the IJAAF during Khalkhin Gol and evenly matched with the Dutch produced Fokker DXXI. In both conflicts, Type 5 was later complemented with the later Type 10 and Type 17 (as well as a few Type 18's during the Winter War) which would prove to be more effective against the opposing aircraft. The Type 5 was still in service with the VVS at the start of the Great Patriotic War in the Summer of 1941, with some of them being captured by the Axis during the advance into Soviet territory. Most Type 5's that survived the initial onslaught were quickly withdrawn in favour of newer models of fighter aircraft like the Yak-1 and LaGG-3 as well as later and more powerful variants of the I-16.