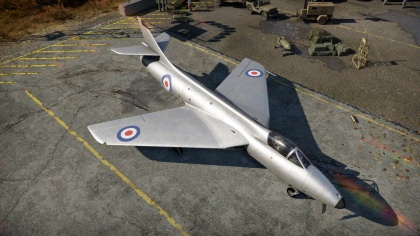 The Hawker Hunter is the iconic 1950s British swept wing fighter. Produced from a requirement for a jet interceptor dating back to 1946 it fulfilled its role with outstanding success. Able to deliver a punishing blow with its four 30 mm ADEN cannons and manoeuvrability at high speed, it sits as the top tier jet for the UK. The F.1 completes the current Hawker line in the British tree after the Vampire FB.1 and Venom FB.4, providing an initial steep learning curve. Its calling card is sheer speed, with the Hunter able to go supersonic in dives once spaded.