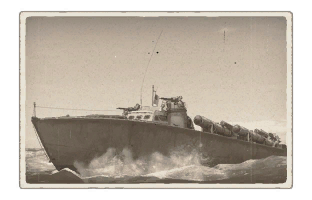 The Higgins 78 ft PT-71 has the following structural layout:

The four 12.7 mm AN-M2 machine guns have a great rate of fire allowing it to deal plenty of damage quickly. It is best used at ranges under 1km, any further and the bullets do significantly less damage and require more compensation for the ballistics. Since the guns rely on sheer rate of fire to destroy enemies, it is capable of engaging both naval and air targets. The recommended belt is APIT. It has slightly less penetrating than AP but gains the ability to set fires.

The 20mm Oerlikon on the rear of the boat covers the rear blindspot of your quad machine guns. Since the 20mm has far less damage output compared to the four machine guns, the 20mm cannon should only be used when the enemy is in that rear blindspot.

The optimal angle to engage other boats is to sail directly at them. You reveal only your bow and bridge to enemy fire while all four of your machine guns can pepper them with bullets. When going up against bigger ships use your speed, evasive maneuvers, and natural cover to approach and drop torpedoes as closely as possible. Then turn tail and run, using your 20mm and smoke to shake off any pursuers. Alternatively, some players choose to forgo torpedoes altogether favoring a lower chance of ammo detonation over the ability to engage bigger ships. All in all, the 78 ft PT-71 is a versatile boat that is not lacking in any department except for armour (but this is the standard at the rank), and it is a good boat for those just getting into Naval Battles.