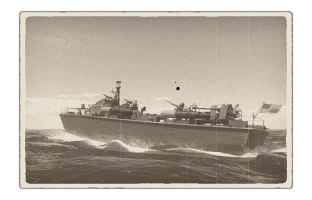 The Higgins 78 ft PT-200 is a rank III American motor torpedo boat with a battle rating of 2.7 (AB/RB/SB). It was introduced in Update 1.79 "Project X" as part of the fleet closed beta test.

As with any coastal motor torpedo boat, the PT-200's survivability is not its strength. The entire ship is made out of wood and also lacks any armour plating aside from 9.52 mm of hardened armour on the rear single Bofors 40 mm turret. The crew count of just twelve crewmembers is relatively average among Motor Torpedo Boats (MTBs), meaning that the PT-200 will not be able to take many hits as well. Keep in mind that the ship can be hull-broken by most shells of 88 mm and above; luckily, it doesn't face many ships with such high-calibre weapons. In terms of vital components, the ship's engines and ammunition magazines all lie partway above the water; this means that a lucky hit from a lower-calibre shell could potentially detonate your ammunition, resulting in a floating inferno. In general, avoid any firefights with the PT-200 as it will be decimated quickly due to its low survivability.

The 37 mm cannon is similar to the one mounted on the P-39s. As such it has poor accuracy but high damage. With its ability to fire for a decent time prior to over-heating, it serves as a potent close range weapons, at the cost of DPS.

The 20 mm cannons serve as a potent light AA weapon and a potent anti ship weapon. They are unable to hit targets at range, however, and excel in close range brawls.

Despite lacking at high BRs, as this ship will likely only face light boats and planes, the .50 cals that saturate its deck make it a potent anti-air boat. Unfortunately, like the cannons they have a short range and have poor angles of firing and depression, limiting their surface usage.

The 4 torpedoes make a potent anti-ship weapon, but due to the slowness of steam-powered torpedoes, they do not have a long range or fast speed, especially compared to the Japanese oxygen torpedo.

The M8 rockets are very situational and typically serve only to create an extra ammo rack.

As with all PT boats, this vessel is purely a high speed cap zone taker, and close range brawler. Like a glass cannon, this boat can do serious damage with its main guns, but also can be very easily destroyed. In low tier matches, this boat serves as a potent vehicle to contest cap zones, and in higher matches, whilst destroyer hunting is not advisable due to destroyers' ability to fire at you with their secondaries using just AI, you can still win some of the vital, early game cap contests, as those early caps often determine the entire outcome of the game.

Another possible strategy for the usage of this boat is plane hunting, as in low tier battles AI anti-aircraft defences are a rarity, and the primary 40 mm cannon is devastating to aircraft if it hits. Torpedo use is also highly effective with this boat, as using a double spread of torpedoes can trap many an unsuspecting opponent. Be aware of gunboats and destroyers, their overwhelming primary and secondary armaments can easily sink your vessel, sometimes even through hull-break.

PT-200 was first assigned to Motor Torpedo Boat Squadron Four (MBTRon 4, under the command of LCDR William C. Specht, USN. MBTRon 4 was a training squadron based at the MTB Squadrons Training Center in Melville, RI. It was the largest MTB squadron, with a peak of 28 boats in the squadron at a time. PT-200 was sunk after hitting an unknown object on 22 February 1944; the location was off of Newport, RI, at 41º23'N, 71º01'W.