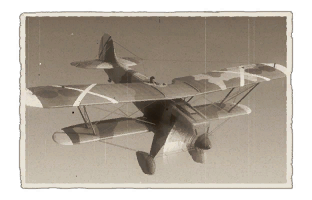 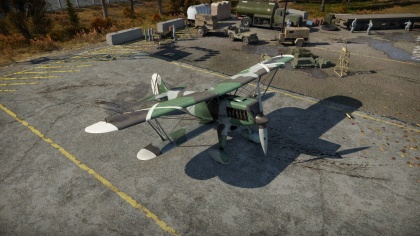 The He 51 B-1 is one of the first planes a player playing in the German aircraft tech tree will be able to fly. Being an early pre-WWII plane, it carries all the characteristics one would expect from such a plane. It has an excellent turn radius, thanks to the biplane design, even at low speeds, and has a remarkably low stall speed. However, these positives only outweigh the negatives if the pilot is new to War Thunder. Biplanes are made entirely from wood and thus, are very fragile. In addition, they are slow, and their armament is limited, and while the He-51 series may not have the worst, it still gets outperformed significantly as soon as it faces newer plane designs which are much faster and better armed.

While the He-51 B-1 may have an excellent turn radius in the grand scheme of things, it shouldn't be relied on, as any remotely experienced pilot will able to exploit its weaknesses to full effect if they are flying virtually any non-reserve plane.

Heinkel He 51 B-1 single-engine fighter

In the spring of 1935, a new fighter variant, the He 51 B-1, was launched into production. It differed from the "A" version in that it had reinforced twin braces and a fuselage rack to mount a 170-litre external fuel tank.

By the spring of 1936, the new version replaced the He 51 A-1 on the production lines. Heinkels were the main Luftwaffe fighters at the time. The He 51 ended up at the centre of a boisterous propaganda campaign developed by the Reich Ministry of Public Enlightenment and Propaganda around the reviving Luftwaffe. However, the He 51 was not commercially successful on the foreign market.

In 1935, after they failed to obtain a licence for the Polish P.24 monoplane fighter, the Hungarian government turned to Heinkel with a request to consider the possibility of producing the He 51 with a French 850 hp Gnome-Rhone 14K engine. Despite the powerful engine, this variant's test results did not satisfy the Hungarians, and they chose to purchase Italian CR.42 fighters instead of Heinkels.

The He 51's career as the main Luftwaffe fighter, meanwhile, started to decline. In January 1936, a series of training duels took place between the Ar 68, a new fighter by Arado Flugzeugwerke, and the He 51. The series was lost by the Heinkel fighter, as it was significantly inferior to its opponent in manoeuvrability, rate of climb, and maximum speed.

As front-line fighter wings were being rearmed with new equipment, the He 51s were handed over to units intended to provide direct air support for ground forces. They did not stay there too long and were soon delivered to training units, where the He 51s were used for training fighter pilots throughout the entirety of World War II.

At the end of the war, He 51s were occasionally used as light night bombers against Red Army units or for anti-guerrilla purposes. Their efficiency in this capacity was deemed unsatisfactory, and the He 51s did not win any fame as night bombers.