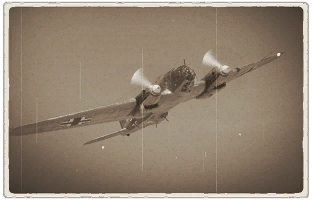 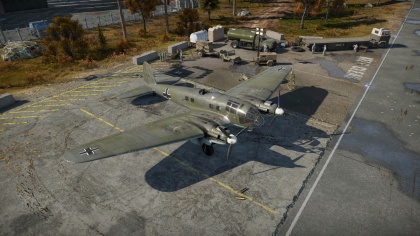 The He 111 H-3 will often find itself in light vehicle battles due to its battle rating. The sole purpose of the He 111 H-3 is to destroy as many ground targets as it possibly can to win the battle.

Upon spawning, you should put the plane into a slight climb, so it gains speed and altitude. Head immediately to nearest key ground targets. You can ask your teammates to provide escort, but the He 111 H-3 is quite durable and can absorb a lot of damage before falling. Next, drop your payload into the targets. Here, it is better to use the 32x50kg bombs, as the 8x250kg will be better suited for bombing bases and isn’t needed to destroy vehicles.

In battles without bases, it would be wise to immediately head toward and carpet bomb targets after spawning, either until you are dead or have destroyed all key targets in an area. Most of your adversaries won't be equipped with cannons, so if enemy fighters decide to attack you, you can act as a distraction while your teammates eliminate key targets.

In ground strike maps with tanks, equip the 8x250kg bombs and either do high altitude base bombing or go for their tanks, ships or pillboxes. A 2x bombing run with the 8x250kg will be enough to destroy a bombing point, and a single direct hit from a 250kg bomb will surely destroy any ground targets like pillboxes and heavy tanks. Lead the targets before dropping your bombs; it's not easy but becomes easier with practice. If you're not used to bombing moving targets, hit static ones like pillboxes.

You can do the same thing as stated for Arcade mode, which also works well in this Realistic, or just go for bases with the 8x250 kg loadout. 2000 kg will be enough to destroy a bombing point in RB. Just ensure that you stay alive during your trip back to the base.

You can do the same thing as stated for Arcade mode, which works well in Simulator, or just go for bases with the 8x250 kg loadout. 2000 kg will be enough to destroy a bombing point in SB. Just ensure that you stay alive during your trip back to the base.

The He 111 H-3 had a crew of five, but when used in a maritime role, this would usually be increased to six. The bomber was powered by Jumo 211 D-1 engines with a takeoff power of 1,200 HP. Up to 2,000 kg of bombs could be housed in the bomb bay; the left section of the bay could also house extra fuel tanks.