The Tribal class, HMCS Haida (G63) is a premium gift rank III British destroyer with a battle rating of 4.3 (AB/RB/SB). It was introduced in Update 1.83 "Masters of the Sea" as part of the British fleet closed beta test. 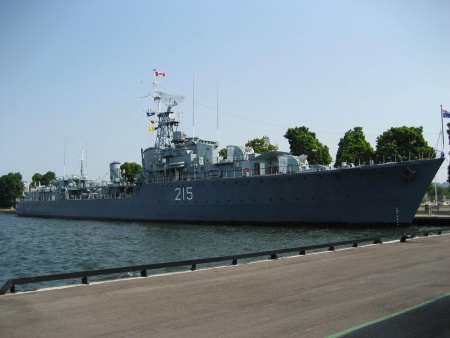 HMCS Haida is a destroyer of the Tribal class of destroyers built for the British, Canadian and Australian navies during World War II. Named after the Haida people, HMCS Haida was commissioned in 1943 and had a storied service career, sinking the most enemy ship tonnage out of all Canadian ships in the Second World War. As such, she was nicknamed “The Fightingest ship in the Canadian Navy”. Haida saw service during the Korean war and was eventually decommissioned and turned into a museum ship. She is still a museum ship today, berthed in Hamilton Harbour, and serves as the ceremonial flagship of the Royal Canadian Navy (RCN).

In the early 1940s, the British built the Tribal class jointly for their own navy and for the Canadian and Australian navies. The RCM ultimately settled on the Tribal class, as it was heavily armed and could essentially be used as a “small cruiser”. In total the RCN ordered eight Tribal class destroyers, which were modified with a new ventilation system to make them more suited to the harsh conditions of Canadian winter service. Haida was built by Vickers Armstrong shipyards at Newcastle, and was commissioned by September 18th 1943.

Haida displaced 1959 tons standard and had a crew of 259 officers and men. Her main armament consisted of six 4.7 inch (119 mm) guns in three dual mounts, along with a secondary 4 inch (102 mm) dual mount. She had an anti-aircraft armament of 1 quadruple 40 mm 2-pounder Pom-Pom gun, as well as six 20 mm Oerlikon guns. She carried a single quadruple torpedo tube mounting, as well as depth charge racks to counter submarines. Powered by steam turbines, Haida could reach a maximum speed of 36.5 knots (68 km/h).

After her commissioning, Haida was based from the British Home Fleet, and immediately partook in convoy escort duties. She was part of the escort screen for convoy JW 55 B, and escorted the convoy away from the battleship Scharnhorst which was then destroyed by British battleships. Haida was subsequently reassigned to perform coastal sweeps of the English channel, in preparation for the D-Day landings of June 1944. During the evening of April 25th 1944, Haida saw her first action when her destroyer flotilla encountered a German torpedo boat flotilla with three Type 1939-class torpedo boats. Haida herself sank the T29 while T24 and T27 were damaged.

Just a week later in the evening of April 29th, Haida and her sister ship Athabaskan encountered the T24 and T27 as they tried to flee from their port. In the ensuing engagement, the Athabaskan was destroyed by torpedoes fired from T24, but Haida was able to severely damage the T27, which was later destroyed by British MTBs. Haida rescued 44 survivors from the Athabaskan, while the remaining crewmembers were either killed or taken prisoner by the Germans. In June of 1944, Haida, along with her squadron, encountered another German destroyer flotilla and engaged them in what would become known as the Battle of Ushant. During this engagement, the German destroyer Z32 was sunk jointly by Haida and her sister ship Huron.

In late June of 1944, Haida successfully sank the German submarine U-971 which had been spotted by British RAF Liberator bombers. In early July, she, along with the Polish destroyer ORP Blyskawica, encountered a German convoy and successfully sank two minesweepers and a merchant ship. Later on in August, the Haida encountered yet another convoy of German ships and sank two minesweepers and a patrol boat.

After her service in the English channel, Haida returned to Halifax for a much-needed refit and was fitted with new sensors. She returned to the Atlantic theatre in April of 1945, and saw one of the last actions of RCN vessels when she was part of an escorting force that attacked two U-Boats that attempted to torpedo their convoy. Both U-Boats were sunk, for the loss of one frigate.

After the cessation of hostilities in the European theatre, it had been intended that Haida be sent to the Pacific Theatre to serve in the American invasion of Japan. However, due to the dropping of Atomic bombs at Hiroshima and Nagasaki, there was no need for this, and the Haida was reduced to reserve in 1947. She later became the first Canadian destroyer to venture into the Hudson Bay. Following the start of the Korean War, Haida was reactivated and sent to the Korean theatre where she participated in several patrols, escorting aircraft carriers and shelling North Korean surface units. She later became part of the “Train Busters Club”, a group of ships which had successfully destroyed North Korean trains by shelling them from the sea. She saw less service during the later part of the 1950s, as her ageing equipment began to deteriorate and malfunction.

Haida was reduced to reserve again in 1962, and was intended to be scrapped. However, members of her crew were able to purchase the ship from the RCN, and converted it into a museum ship. Initially, the Haida was docked on the Toronto waterfront, but she has now been moved to Hamilton Harbour. Nicknamed “The Fightingest Ship in the Canadian Navy”, Haida is still a museum ship and serves as the ceremonial flagship of the Royal Canadian Navy.