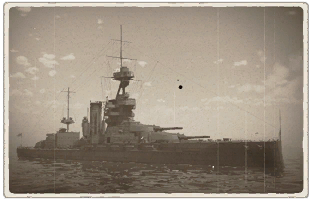 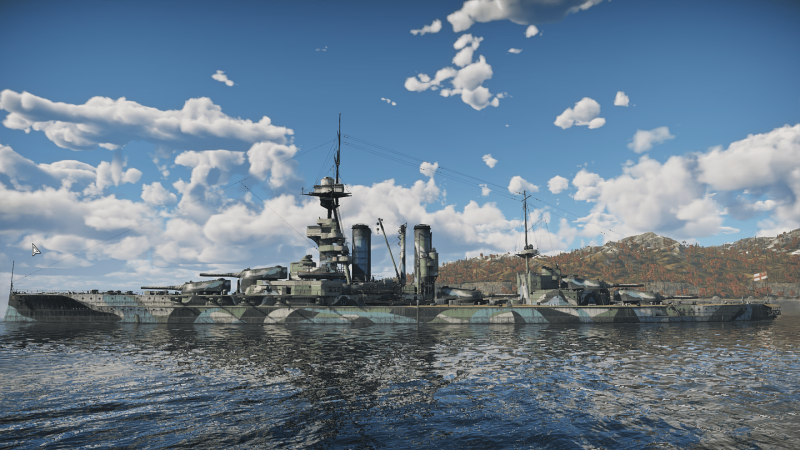 The HMS Marlborough, 1927 is a rank V British battleship with a battle rating of 6.7 (AB/RB/SB). It was introduced in Update "Ground Breaking".

The Marlborough is an Iron Duke-class battleship, the last of the British so-called "super dreadnoughts" to be armed with the 13.5-inch guns. They were the most advanced battleships in service with the Royal Navy at the outbreak of World War I, featuring significantly larger guns than contemporary German dreadnoughts.

The Marlborough is armed with ten BL 13.5 inch Mark V (H) guns distributed in five twin turrets. Four of these located in the bow and stern, two each, while the fifth turret is located amidships. All are located in the centreline, allowing all main guns to be used in a broadside. They have a maximum rate of fire of 2 rounds/minute with an ace crew. All turrets have +/-150 degrees of traverse, although the amidships turret has somewhat more restricted firing arcs because of the superstructure. Unlike the preceding Dreadnought, the Marlborough has a modern director fire control system that is considerably more accurate and computes firing solutions faster.

The secondary armament of the Marlborough consists of twelve BL 6 inch Mark VII guns located in six casemates on each side of the hull. These have a maximum rate of fire of 7 rounds/minute with an ace crew.

The secondary guns can fire HE or CPC shells. Both shells have fairly large fillers of ~6.6 kg and ~3.7 kg of TNT equivalent, respectively. They are effective against destroyers and can even inflict considerable damage on lightly-armoured cruisers.

The anti-aircraft armament of the Marlborough consists of only four QF 4 inch Mark V guns. Two of these are mounted on each side of the bridge conning tower, with another two mounted beneath the aft mast. These do not have a choice of ammunition, firing only HE shells, which severely restricts their effectiveness against aircraft.

The Marlborough has four 21 inch fixed underwater torpedo tubes. These are located in front of the bow turrets and behind the stern turrets, one facing each side of the ship. These fire the 21 inch Mark IV torpedo, which has a speed and range of 65 km/h and 7.3 km. It is armed with a 234 kg TNT warhead.

The Marlborough relies on her powerful 13.5-inch main gun battery to inflict heavy damage on enemy vessels from long range. Her HE shells have the largest explosive filler of any shell currently in the game, while the CPC semi-armour piercing round is a lethal threat to cruisers with its blend of decent penetration and potent explosive filler. The AP shells are nothing to sneeze at either, thanks to their good penetration and respectable fillers. The powerful secondary 6 inch guns are also quite capable of defending the Marlborough against most destroyers and smaller craft that get into range. Manually controlling the secondary guns while waiting for the main guns to reload is also helpful for supplementing the damage output of the Marlborough.

The armour protection on the Marlborough is adequate, but can be improved dramatically by taking advantage of her good main gun traverse arcs to angle the armour. This is particularly important when engaging other battleships, as the upper belt armour is fairly thin and she does not have a torpedo belt to help break up enemy shells like on the Wyoming or Parizhskaya Kommuna.

The greatest weakness of the Marlborough is her non-existent anti-aircraft defences. Like almost all World War I era ships, she has nearly no anti-aircraft guns and relatively thin deck armour, making her vulnerable to large bombs. She also completely lacks any torpedo bulges or protection, and is thus also very vulnerable to both ship and air launched torpedoes. She is completely reliant on allied cruisers or more modern battleships such as the Scharnhorst or Parizhskaya Kommuna to provide anti-aircraft protection.