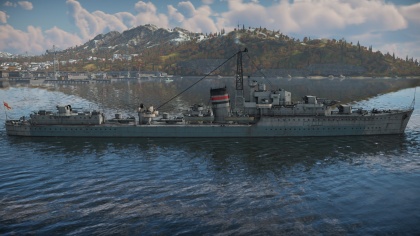 The HMS Jervis, J-Class Flotilla Leader was a destroyer of the J-Class. Commissioned just before the outbreak of war, Jervis saw extensive service in the Mediterranean and Atlantic theatres. She participated in multiple major engagements in the Mediterranean, and later participated in the D-Day landings of 1944. Jervis was retired at the end of the war, and later scrapped. She was highly decorated and received 13 battle honours for her service in the Second World War. Jervis also gained a reputation for being extremely lucky, as she never lost a single crew member during her 5 and a half years of service.[1][2] 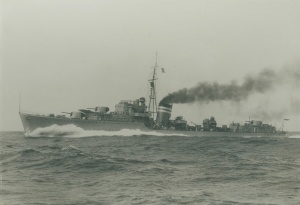 The Jervis, as a member of the J-Class, was designed as a smaller follow-up to the preceding Tribal-class destroyers. Being smaller, the J-Class had a stronger balance between guns and torpedo armament, compared to the “gunship-style” Tribal class destroyers. Jervis, in particular, was fitted with additional command space to accommodate the Flotilla commander. Jervis displaced 2600 tons, and was capable of 36 knots (66 km/h).[1] Her main armament consisted of six 4.7-inch (120 mm) guns in three dual turrets, two mounted at the bow and one at the stern.[1] She also carried numerous anti-aircraft defences as well as eight 533 mm torpedo tubes in two quad-mounts.[1]

In 1941, Jervis served in the Battle of Cape Matapan, where she sank the crippled Italian cruiser Zara and boarded Zara’s sister ship Pola. She later participated in the battles of Crete and Sirte, where she managed to survive undamaged despite heavy allied losses.2 Later on, she was immobilized for six weeks by an Italian manned torpedo.[1][2]

Jervis is known as an extremely lucky ship: despite being active for almost the entirety of the war and having served in 13 major naval engagements, she never lost a single crew member.[1] In fact, she was one of just two J-Class ships to survive the war. She received 13 battle honours for her service during the Second World War, making her one of the most highly decorated British warships in modern history.[1][2]