Difference between revisions of "HMS Colossus" 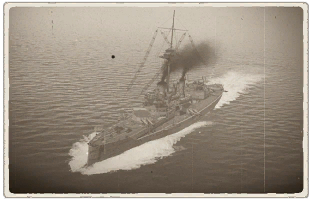 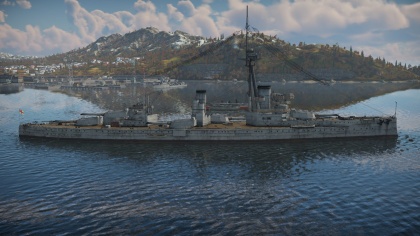 The HMS Colossus (1918) is a rank V British battleship with a battle rating of 6.0 (AB/RB/SB). It was introduced in Update "New Power". 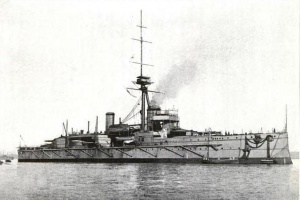 HMS Colossus was the lead-ship of the two-member Colossus-class, the 5th class of dreadnought battleships constructed for the Royal Navy. Named after the Colossus of Rhodes, she was launched in 1910 and commissioned in 1911. She served in training activities before the start of the First World War, and served as part of the First Battle Squadron for the majority of the war. She participated in the Battle of Jutland, and became a training ship following the war. She was hulked in 1923, and scrapped in 1928.[1][2]

The HMS Colossus was of a similar design to the other dreadnoughts of its era. It displaced over 20 thousand tons standard and was 166 metres long;[1] similar to its predecessors, it was capable of making 21 knots (39 km/h). The Colossus was armed with a main armament of five dual 305 mm (12-inch) guns, with three mounted on the centreline and two at beam positions.[1] However, unlike the preceding dreadnoughts, one of its beam turrets faced backwards. The ship was also equipped with numerous secondary guns,[1] though its anti-aircraft guns were sparse with just a single mount. The Colossus was the last British dreadnought to carry a 12-inch main armament, as future designs switched to the more potent 13.5-inch (343 mm) guns.[1]

Following her sea trials, the HMS Colossus served with the British 2nd Battle Squadron and participated in the Fleet Review of July 1912.[2] Following the start of the First World War, Colossus participated in the Battle of Jutland; she was hit by two German shells, making her the only British dreadnought to be damaged.[2] The battle was tactically inconclusive, but served as a strategic victory for the Allies as the German fleet would never sail again. In 1917, Colossus was recalled for a refit; she rejoined the British grand fleet in 1918 but the war had drawn to a close.[1] As a result, Colossus was placed into reserve as the flagship of the reserve fleet; she later served as a training ship for the Royal Navy Cadets.[2] Following the Washington naval treaty, Colossus was sold for scrapping, and was eventually scrapped in 1928.[2]