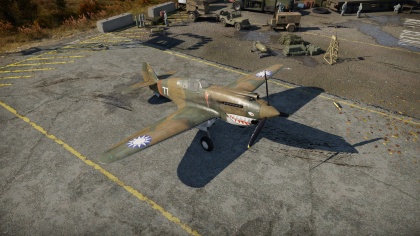 In Ground RB, you are a nice ground pounder as there is a bombload of 1x 500lb bomb plus 2x .50 cals in the nose. When you spot an enemy ground unit, it is best to climb to around 1500m before diving at it. This way you have quite some time to distinguish your target as you dive down, and the speed gathered will also protect you. Recommended diving angle is around 30-70 degrees. Once you speed passes 520 kph and the target fills up the reticle, pull the reticle right above the top of the target and release the bomb, it will land very close if not directly hit the target. If you cannot dive that fast, aim higher above the target before releasing bomb. After dropping the bomb, the nose-mounted .50 cals are good for strafing tanks' roof armor. Now you want to dive steeper for the bullets to pierce through. When diving, cut throttle and slow down to give yourself a long window to aim and burst, you must fire from a rather far distance since you need some time to pull up from the near-vertical dive. The 12.7mm AP rounds are good at penetrating roof armor and knocking out crew/modules, giving you kills or assists.

In Ground RB, avoid SPAAs at all cost. If you are the only aircraft up and there are SPAAs firing towards you, get away from them. Although the H-81 is armored by steel armor plates and bulletproof glass, it is still very vulnerable to 12.7mm/20mm/37mm shells. Direct hits will usually damage your huge cooling system which can result in a crash. However, if a teammate plane gets the attention of enemy SPAA, you can sneak up on them. At this BR, common SPAAs include M16, Flakpanzer 38 and Sd.Kfz. 6/2.