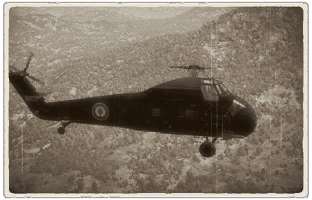 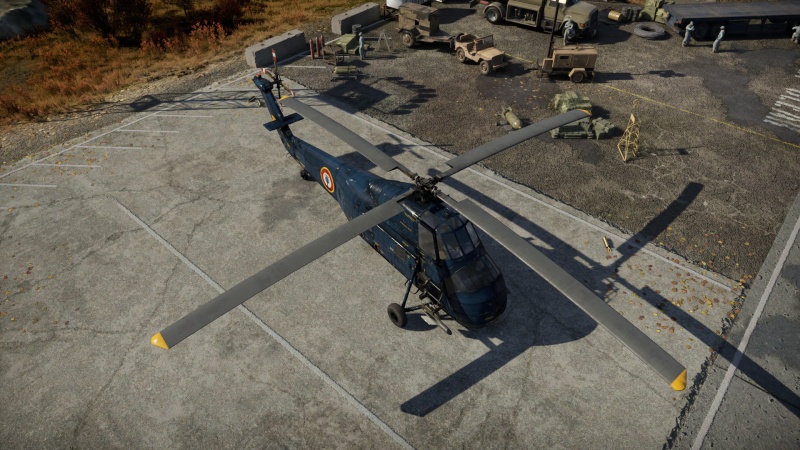 The Sikorsky H-34 was manufactured as a piston-engined military helicopter originally intended for anti-submarine warfare, however, it also has seen service as a medium transport helicopter and as a combat helicopter. This tail dragging helicopter has the radial reciprocating engine mounted in the nose of the aircraft, with the driveshaft traversing through the cockpit.

French aviation company Sud-Aviation assembled a total of 135 H-34's built in the U.S. along with a total of 166 H-34s produced by Sud-Aviation under licence from Sikorsky for use in the French Air Force, Navy, and Army Aviation (ALAT).

The helicopter's machine guns are mounted towards the nose of the helicopter, in front of the landing gear struts. These machine guns can be loaded with one of four different ammo belts (Default, Universal, Tracers, and Stealth). However, owing to their small calibre, they are only effective for attacking very lightly armoured targets (< 10 mm maximum armour thickness), they have limited effectiveness against aircraft and are ultimately useless against armoured targets. Their relatively low rate of fire offers better aim controllability at the expense of total damage output.

The H-34 was developed in the early 1950s as the successor to the H-19 Chickasaw. The new helicopter was enlarged and was overall more powerful than its predecessor, yet still retained some core design elements, such as the nose-mounted radial engine under the cockpit.

However, the H-34 was also widely exported and built under licence by other nations. France was one of the earliest nations to adopt the H-34, with it entering service in 1956. France initially received numerous American-built disassembled H-34s, which were then reassembled in France. Later on, the Sud-Aviation company acquired a licence to produce the H-34s locally. In the end, close to 300 French H-34s were built and used by the French forces. The vehicle was actively used during the war in Algeria, marking the first mass use of attack helicopters by the French army.