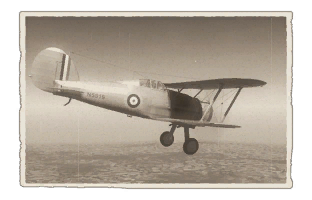 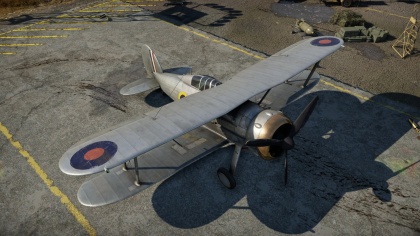 The Gladiator Mk IIS is a gift rank I British fighter with a battle rating of 1.3 (AB/RB/SB). It used to be a part of Britain's reserve aircraft before it and the Gladiator Mk IIF was removed and replaced by the Fury and Nimrod aircraft. Unlike the Mk IIF, the Mk IIS was offered once during the "Gladiator Glory!" event in February 2015 and has since been unavailable to the public.

At Rank I and a battle rating of with a battle rating of 1.3 (AB/RB/SB), this plane will typically be one of the first fighters a new player will research. However, the Gladiator, like its sea-based cousin, may be difficult to seek success in, especially in realistic battles mode. Within realistic battles, when up-tiering comes into play, it will have to deal with not only biplane adversaries such as the CR.42, F3F and the very manoeuvrable Ki-10, but also more advanced fighters such as the P-40E, Bf 109s, I-16s, and Ki-43s. All these plane types have several varying advantages against the Gladiator, which can make early grinding a bit unbearable for some players.