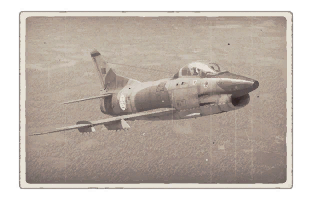 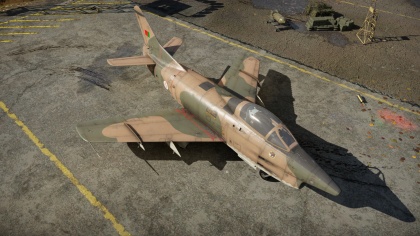 There are few changes between the Pre-serie, R/1, R/3 and the R/4, with exception of the armament, and this guide can be considered universal for all listed aircraft.

The M3 Browning is a new weapon in the Italian arsenal at this 5th tier and compared to the previous experiences a let down. The rate of fire is phenomenal, but the small calibre and ammo size put a serious damper to the mood, that is in comparison of course. In practise and with good aim, it can easily shred four fighters. The high bullet velocity and fire rate is quite the advantage in the fast pace world of jet combat, ensuring hits in deflection shots were the lower rate of fire found in the Soviet jet fighters might have failed the pilot.

The G.91 R/3 was the primary West German variant of the Fiat-made light fighter, with 50 built in Italy and another 294 under license in West Germany. It had more powerful armament, added two wing hardpoints, and improved avionics compared to the Italian G.91 R-1s. The 50 R/4 that followed were identical to the R/3 other than in terms of armament. The R/4 supposed to have been sold to Greece and Turkey, but after that sale fell through they entered West German service instead. The R/4 was also operated by the Portuguese Air Force (Força Aérea Portuguesa) during its colonial wars against Angola, Mozambique and other domains of the former Portuguese empire. This aircraft had the nickname of 'Gina' in Portugal service.