From War Thunder Wiki
Revision as of 15:26, 5 June 2019 by Inceptor57 (talk | contribs) (The ability to mount a torpedo does not make one a torpedo bomber - These are categorized as those labeled as such by the in-game classification)
(diff) ← Older revision | Approved revision (diff) | Latest revision (diff) | Newer revision → (diff)
Jump to: navigation, search
G.55S 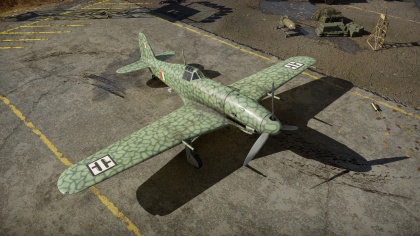 The G.55S is a gift Rank IV Italian fighter with a battle rating of 5.3 (AB), 5.0 (RB), and 4.7 (SB). It was introduced in Update 1.69 "Regia Aeronautica" as a pre-order prior the update that also allowed access into the Italian Closed Beta Test. A model of the G.55 Centauro converted for a torpedo-bombing role, the G.55S has the ability to engage naval targets while keeping the air attack characteristics of the G.55 model.

Arcade Battle: Once in the game, climb to a good altitude. Its great climb rate ensures that the G.55S can easily gain an altitude advantage over their adversaries for the best tactical situation for the plane. Once altitude superiority has been achieved, practice Boom & Zoom tactics against enemy planes and take them out in high-speed fly-bys. Due to the low armour on the G.55S, it is not recommended to loiter about to minimize the time being targeted by enemy vehicles.