Difference between revisions of "G.50 serie 2" 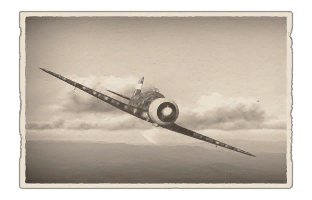 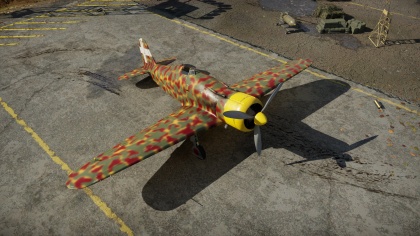 The G.50 Freccia serie 2 is a rank I Italian fighter with a battle rating of 1.7 (AB/RB/SB). It was introduced in Update 1.69 "Regia Aeronautica", though a variant existed in the German tech tree prior to the update.

In general, it's a slightly lesser version of the M.C 200, and as such, it very much flies the same, albeit a little bit slower.

The Fiat G.50 Freccia is a typical Italian pre war design, it's fairly sturdy, has modest speed and poor armament consisting of 2 Breda SAFAT 12.7 mm guns mounted in the upper cowling, which means it has the distinctive low rate of fire (roughly 400 rounds per minute). However it does have its merits as well, it's fairly agile, it has no trouble dog fighting Hurricanes it will commonly face, and if things become too hectic, the G.50 can quickly escape by going into a dive, and exploiting its surprisingly good dive acceleration to gain separation. Furthermore it pays to be aware of its modest acceleration and overheating, as such, it's generally advised to keep an eye on your speed and use WEP sparingly.

For the armament, the same applies to all other Italian aircraft; generally you want to use Tracers, Air targets or Stealth since they are the belts that deal the most damage. Shell velocity is low, hence they suffer above 300 meters, so only fire at or below that range for best effects. Furthermore, much like the other Italian fighters the armament is woefully inadequate to deal with bombers, hence it is best to avoid them entirely, or focus on taking out the engines. The only exceptions are the very early biplane bombers, such as Swordfish, Po-2 and the like.

The G.50 was the first all-metal Italian monoplane fighter, and the first with retractable landing gear. A contemporary of the CR.42 biplane, it was a transitional plane that was not well-liked by pilots used to more maneuverable biplanes. Sturdy and easy to handle, it was slow and poorly armed even by early war standards. Designed by Fiat's Giuseppi Gabrielli, it lost the 1936 competition for a new interceptor to the Macchi M.C. 200, but was chosen anyway. Combat flight tests in Spain in 1939 followed, and the first planes entered combat service in late 1939. Finland bought 35 G.50s, using them in their air force until 1944.

At the start of World War Two there were 118 G.50s in Italian service in two fighter gruppi. They fought in the invasion of France, and then in the Battle of Britain alongside C.R. 42s, performing poorly against British fighters. It continued in service in Greece, the Mediterranean and Africa, but by 1940 was largely used as a ground attacker. A total of 782 were built.