Difference between revisions of "G-5" 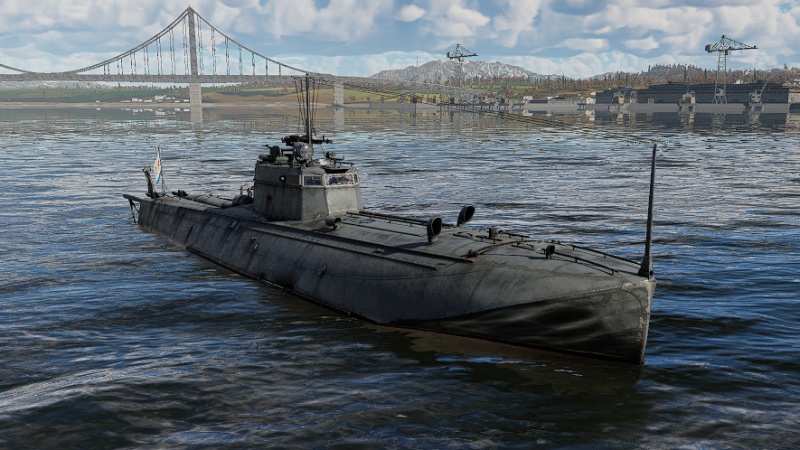 The G-5 Type is a reserve rank I Soviet motor torpedo boat with a battle rating of 1.0 (AB/RB/SB). It was introduced during Update 1.79 "Project X" when the Soviet fleet was implemented into the game. It has a single 12.7 mm DShK machine gun and carries two torpedoes

The G-5 has no armour in its overall design, to the point where the only armour is the armoured glass, which provides 5mm of protection! located on the windows of the bridge. As such, any small arms armament can penetrate and destroy, critical modules and knock out crew members. The G-5 carries a crew complement of six, which are all located around the conning tower of the ship. Meaning any well placed shots with high explosive rounds or concentration of fire on this area, can see all the crew members knocked out and the ship destroyed!

The only gun on the G-5 is a single 12.7 mm DShK machine gun. It can destroy any motor torpedo boats and some larger boats if your lucky. Being located in the centre of the vessel it does have 360 degrees of aiming but is somewhat restricted in elevation when pointed towards the bow due to structural designs meaning it can only be reliably fired at other vessels when aimed at the sides or rear of the ship. You can research two different ammo belts for the 12.7 mm, the high explosive incendiary (HEI) and armour piercing incendiary tracer (APIT) rounds.

The G-5 carries two 533 mm 53-38 torpedoes. They have a range of 4 km at a speed of 82 km/h. With the Torpedo Mode module installed, they can reach 10 km at a reduced speed of 75 km/h. As both torpedoes sit in the aft pointing towards the bow, they are accurate and easy to aim with.

The G-5 is a fast and manoeuvrable ship, with speeds upto 122 KM/H in Arcade and 94 KM/H in Realistic & Simulator Battles. A G-5 ShVAK also offers excellent manoeuvrability, at high speeds compared to it competitors such as the PT, LS and others. Additionally the G-5 ShVAK is armed with a 20mm cannon, not all rivals have cannons or machine guns. A G-5 is one of the fastest vessels in the game, almost twice as fast as other vessels similar in it's class.

When playing the G-5 in arcade battles, it is important to be aware of your team mates - since most vessels travel at high speed it is not impossible for your team mates to accidentally collide into you. When this happens, the G-5 is a small and lightweight vessel, it is possible when they collide in the heat of battle, that they can flip you over and you drown.

In battle, weather it be arcade realistic or simulator: The G-5 can be compared to a piranha, it's small size, high agility, resilience and being very fast makes it unstoppable in the hands of a skilled player. When engaging enemy ships, turn the G-5 into them, keeping G-5 profile, very small and hard to hit. Using the great high speed manoeuvrability offered, bring the ship along side and blast them with the 12.7 mm machine gun.

The G-5 motor torpedo boat, produced from 1933 until 1941, was developed from the Sh-4 class of motor torpedo boats. The unarmed prototype model of the G-5, designed in 1932, used imported Italian engines as no satisfactory Russian engines were yet available. The production model, however, used an adapted Mikulin AM-34 aircraft engine, designated as GAM-34. Its torpedo release system was based off of British WWI-era coastal torpedo boats that were captured during the Russian Civil War. It was also armed with a 7.62mm machine gun, however, later models were instead fitted with a 12.7mm machine gun, and it is this iteration of the G-5 that is available as a reserve boat in the USSR naval tech tree. Other variants that were produced included ships that possessed two 12.7mm machine guns instead of one, and ships that were additionally mounted with ROFS-82 or ROFS-132 rocket launchers. Some even had both (Such as the G-5 TKA 106, available in the USSR's premium naval tech tree). Still others replaced the 12.7mm machine gun entirely with a 20mm ShVAK cannon (Such as the G-5 (ShVAK), also available in the USSR's premium naval tech tree). Including all variants, an approximate 300 G-5s were built. Despite their classification, they are not known to have been used to torpedo enemy ships very often, instead being relegated for the most part to more standard assignments such as landing units, transports, escorts, and the like. Four were exported to the Spanish Republican Navy for use in the Spanish Civil War, and an additional unknown number to North Korea. They remained in Soviet service until the 1950s.