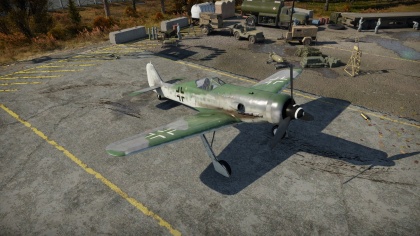 Due to the D-12 and D-13 being so similar, you can fly them almost identically. (Keeping in mind the differing armament velocities at longer ranges) the Fw 190 D-12 has a high top speed for its BR, heavy armament with a large ammunition pool, a fantastic engine built for high-altitude performance and it features hydraulic ailerons for an amazing high speed roll rate. It is one of the only prop driven aircraft able to reach speeds exceeding 450 MPH/725 KPH while still retaining some ability to manoeuvre. The D-12 is an energy fighter, the plane relies on speed and engine power to be successful. With it's high burst mass of and the destruction power of the Minengeschoße no bomber in game can survive a short burst. Against fighters the MK 108 is as usual difficult to aim and hit. Not to mention just overkill. As both guns have different ballistics, bind a separate key for your MG 151s. This makes aiming easier, saves ammo and is still sufficient enough against any fighter.

The Fw 190 D-12 is most effective at climbing above your foe and employing standard Boom and Zoom tactics. Keeping in mind that at 700 kph+, the flight surfaces of the Dora series notoriously compress and pulling out at those speeds can be tricky, however, it has been found that because of the fuselage mounted fuel tanks in the Dora series, taking higher fuel loads will cut the amount of time it in takes to pull out of those high speed dives by up to 50% (50% when comparing minimum fuel load to full fuel load.(As of 1.71.1))