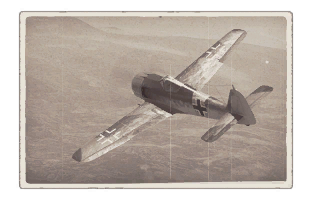 The A-5/U12, similar to other FW 190's is an excellent climber and diver, while being a poor turner. The plane can maneuver vertically quite well, and can out-dive opponents. However, after about 600 km/h the controls tend to lock up, so care should be taken.

The Fw 190 A-5/U12 can be outfitted with the following payloads:

The four cannons are arranged into two bundles of two mounted under each wing. If fired continuously with the aircraft mounted cannons, the gun pods will continue to fire longer.

At the beginning of a battle, it is preferable to climb slightly to the sides to ensure that you have the altitude advantage over the enemy without having to encounter them head on in a low energy climb state, while staying close enough to the engagement to intervene once they appear. It is important to note that, like all FW 190's, the turn rate of the A-5/U12 is abysmal compared to most other aircraft you will meet, so out-turning opponents should not be attempted. However, the short wings on the plane are do give it an advantage over similar craft at its BR in terms of strength, and can easily survive several magnitudes of G-force - which is one of the few options available to the A-5/U12 for defense. Vertical engagements and energy retention are a must.

Once researched, the plane gains the option to mount two dual 20 mm MG 151 gun pods; however, as expected, this add-on hampers climb rate and aerodynamics, and should be reserved for bomber hunting missions.