Difference between revisions of "Fw 190 A-1" 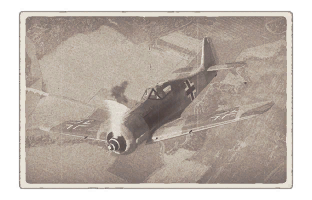 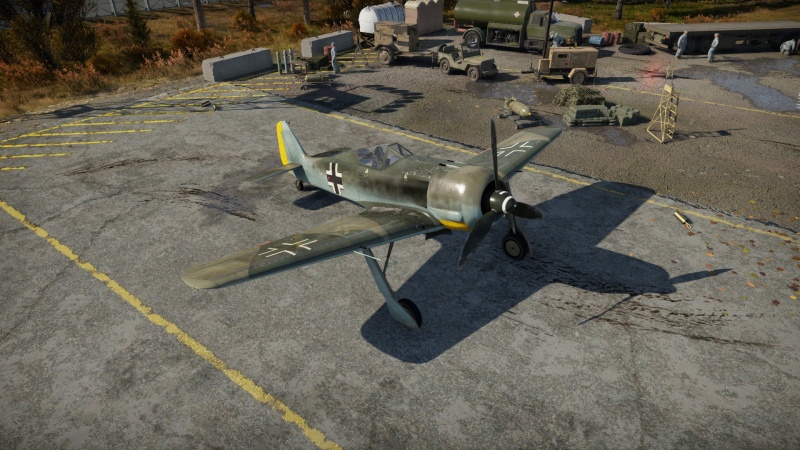 The Fw 190 A-1 is a rank II German fighter with a battle rating of 3.7 (AB), 3.0 (RB), and 3.3 (SB). It was introduced in Update 1.39. The Focke-Wulf Fw 190 Wuerger (Shrike) was a single-seat, single-engine monoplane fighter used by the Luftwaffe in WWII. One of the best fighters of the time, it was widely used during the Second World War. A total of over 20,000 were produced, including some 6,000 fighter-bomber variants. The 190 remained in production from 1941 until the end of the war, going through multiple redesigns. The Fw 190 made a name for itself as a true Luftwaffe workhorse and was used in a wide variety of roles, including a high-altitude interceptor (especially the Fw 190 D), escort fighter, fighter-bomber and night fighter.

The officially designated nickname "Würger" denotes a kind of carnivorous bird (a shrike), but can also be translated as choker, or strangler. In that regard fits the contemporary English designation well, too: "Butcher-bird".

The Fw 190A-1, as all the planes in this line, are some of the best Boom and Zoomers in the game and should be flown exclusively in this style. The performance at high speeds is excellent, as is their dive and zoom characteristics. Do not ever engage in a turnfight as a "furball" with superior turners such as the A6M2 will end badly. Instead fight mainly in the vertical. Try to have an altitude, or speed advantage over your opponents (by climbing to the side at the start of the battle and then enter the highest battle you see). It is still possible to subdue your opponent with the A-1 due to the fantastic roll rate of the "Würger".

Your control surfaces become noticeably less responsive at low speeds so keep up to speed.

While the Focke Wulf retains it dive abilities even without all upgrades, getting to a vantage point to utilize these strength can prove difficult. Therefore unlocks in the category "flight performance" are a must, especially those which grant increased climb rate (e.g. "Engine", "Compressor"). New 20 mm belts are also a good choice, as the "Air targets" belt improves the damage significantly. "Stealth" belt for the 20 mm is also favorable due to the composition of the belt, consisting of 3/5 Minengeschoß, and the lack of tracers make aiming easier by not notifying your enemy of your shots, keeping them calm. The 20 mm cannon upgrade is hardly worth though, it tends to run out of ammo before it can overheat, but they can reduce cannon spread. Different story for the 7 mm LMGs though. They should be a tertiary priority.

Unlike the He 112 B-0 with 2 x MG FF cannons, the Fw 190 has 2 x MG FF/M cannons, which are identical except for the re-engineered shells and barrel for the MG FF/M. The "M" variant has access to the deadly Minengeschoss shells (mine shells) that can wreak havoc on most planes at the rank. However, keep in mind the brutally low velocity of the MG FF/M shells. Fire when within 400 m of your quarry for best results.

The MG 17 LMGs are not effective against most planes. However, when equipped with Stealth belts these MGs can turn into powerful anti-ground destroyers. Armoured cars and AAA are great targets for the MGs.

Watch your ammo count. Like the Spitfire Mk IIb, the Fw 190 A-1 has only 60 rpg. The lower fire rate of the MG FF/M cannons can work in your favour, however.

When engaging enemy fighters, do it on your terms by climbing first to gain an altitude and energy advantage. Perform boom and zoom attacks by flying over your target, gaining speed by diving towards and take them out before they can evade, but watch your speed and altitude as the the Fw 190's elevators are quite unresponsive and take some time to get used to. You can then climb back quickly at a secure altitude before any opposition tries to catch up. In Arcade, you can go bomber hunting, as you are not limited by ammo count and the Minengeschoß will make short work of the bombers. Finally, you can also perform ground attack on soft targets. Remember to maintain speed when ground-pounding, as an enemy fighter can blow you out of the air if you have no energy.

When attacked, you can often just dive away from planes, such as Spitfires and La-5s, but you need to be at a decent altitude to gain top speed, so do not be to quick to dive after an enemy, if they fly below your plane. Unless you are higher then everybody else, or alone. Just be sure then to have the time to regain the lost altitude. The Fw 190 A-1's superb roll rate also allows for going on a horizontal evasive. In a dive the 190 can, due its short wings, pull quite some stunts to either lose the hunter, or even make him loose his own wings.

Sharp rolling scissors can be effective. This is favourable strategy against La-5, Yak9 & Spitfire fighters who have due their low wingloading (and partly wooden wings for the Soviets), less resistance against high G manoeuvres. Again be sure to regain your energy by a zoom-climb. Just look out while doing so, many pilots die as they do not notice a second enemy aircraft approaching. German proverb:"Wenn Zwei sich streiten, freut sich der Dritte." ~ "When two quarrel, the third will reap the success." Of course this could also be you.