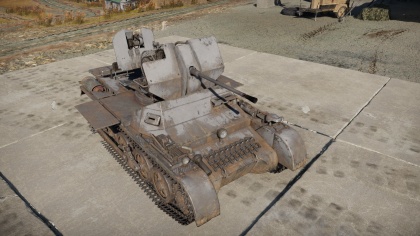 The Flakpanzer I Ausf. A is a rank I German self-propelled anti-aircraft vehicle with a battle rating of 1.3 (AB/RB/SB). It was introduced during the Closed Beta Test for Ground Forces before Update 1.41. 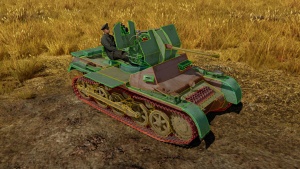 The Flakpanzer I has exceptionally poor survivability. Even frontally, where the protection is at its best, it can be destroyed with a machine gun. The 7 mm gun shield can be penetrated even by 6.5 mm tracer rounds, while anything with 6 mm of penetration can penetrate the driver's optics. If that isn't enough, the Flakpanzer is also hull-breakable, so early-rank vehicles firing HEAT or HE rounds are able to one-shot you. Furthermore - artillery strikes should be avoided at all cost, as they have a very wide shrapnel radius, which combined with a very exposed gunner means certain loss even if the shell explodes meters away. 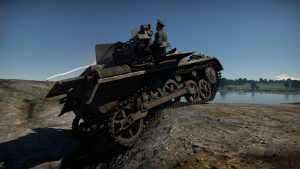 The mobility of the Flakpanzer I is the worst among contemporary AA systems, at 31 km/h forward (RB) and -6 km/h backwards, it's especially troublesome on the flat, hard surfaces where other AA guns of the BR can often do over double the maximum speed. Where it has an advantage is in extremely rough terrain or hill climbing, where its tracks and a good power-to-weight ratio (10.36 hp/ton fully upgraded in RB) provide a noticeable advantage over the wheeled vehicles, though it still loses to the tracked AAs such as the Swedish Pvlvv fm/42 (14.17 hp/ton, max speed of 49 km/h, fully upgraded in RB).

The Flakpanzer I is armed with the 20 mm FlaK38 cannon, which turns out to be fantastic for a cannon of this rank. It boasts a high fire rate, 20-round magazines, useful HE rounds to shred low-flying planes, 46 mm penetration AP-I, and 64 mm pen APCR. The gun will destroy most enemies it can encounter with the APCR belt, and can easily be used even if uptiered. The gun offers excellent handling, being able to quickly guide on targets and has just enough ammunition to either cripple or outright destroy most hostile tanks. It's not as great against aircraft, but using shorter, controlled bursts one can achieve much better results than by spray-and-pray 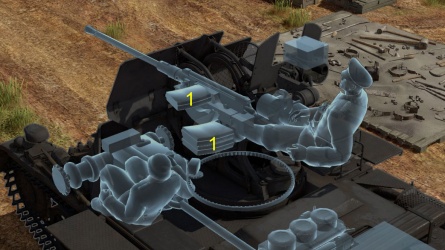 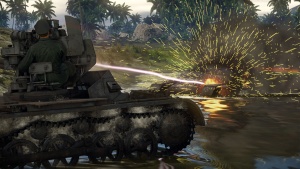 Flakpanzer I is perfectly capable of dealing with enemy tanks, with PzGr 40 being able to penetrate tanks through frontal armour

The Flakpanzer I is an extremely versatile and potent vehicle, working largely as a glass cannon on the battlefield. It's best used as a flanker and tank-destroyer with situational use against unaware patrolling aircraft. The chassis is not particularly stable, making it more tricky to shoot on a move and easy to roll over. Turret traverse is very fast, allowing it to react to new threats and often fire the crippling shots before the enemy fully emerges from cover. While it can essentially spray 20 mm rounds at targets, it is advisable to maintain trigger control and conserve ammunition, firing only when needed because reload time between ammunition magazines is punishing, often being longer than hostile vehicles', giving them a better chance to take a second shot if the first one missed.

After researching FPE and Parts one should prioritize reaching PzGr 40 as soon as possible. The path towards it should lead through PzGr (as it significantly increases anti-tank capability over the Default ammunition belt until the PzGr 40 is researched) and Crew Replenishment, otherwise leaving it largely up to personal preference, as the Flakpanzer I largely features good mobility and accuracy. 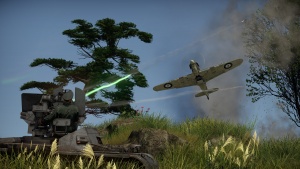 The Flakpanzer I had a hull, engine, transmission, and chassis which were similar to the Pz.Kpfw. I Ausf. A tank. In the modified turret box, in the place of the dismantled old turret, a 20 mm Flak 38 gun was installed on a platform. The gun had an operational fire rate of 220 rounds per minute and allowed the tank to effectively engage low-flying targets. This gun's vertical angle could range from -10 to 87 degrees.

A total of 24 of these self-propelled anti-aircraft guns were built. Two more were built with 2 cm FlaK 30 guns.

All of the Flakpanzer I guns which were released were used by the 614th flak battalion, which fought on the Eastern Front at Stalingrad. The guns were often used for direct fire support for ground troops, firing against ground targets.

One of their flaws was that the trajectory calculation was cumbersome. In order to compensate for this, folding metal sides were added, but they did not do much to remedy the situation. Therefore, attacking ground targets required 5 people, but anti-aircraft fire required a crew of 8. The anti-aircraft vehicle was protected by nothing but its front armour. Most of the ammunition was placed in a specially designed Sd.Ah.51 trailer. Communication between vehicles was carried out using signal flags, since the radio equipment had been dismantled.