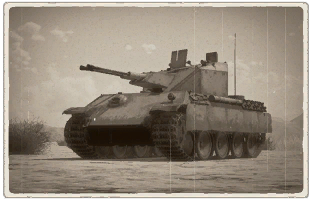 The 3,7 cm Flakzwilling auf Panther Fahrgestell, Flakpanzer 341, also known as Flakpanzer 341, is a rank IV German SPAA with a battle rating of 6.7 (AB/RB/SB). This vehicle was originally introduced as a main tree vehicle, however as of Update 1.91 "Night Vision" it was shifted to become a gift vehicle for players who previously owned it.