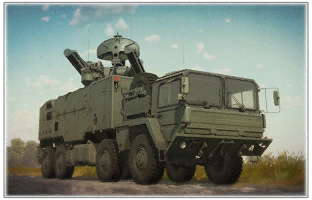 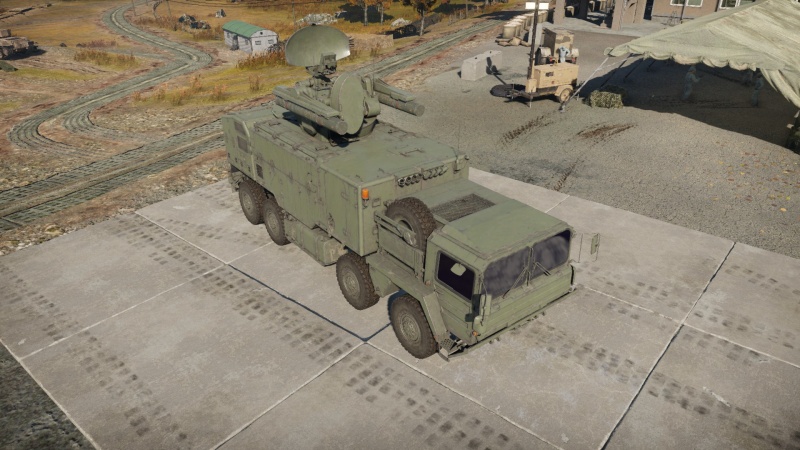 The Flugabwehrraketensystem Roland auf Radkraftfahrzeug is a rank VII German SPAA with a battle rating of 10.7 (AB) and 11.0 (RB/SB). It was introduced in Update "New Power". 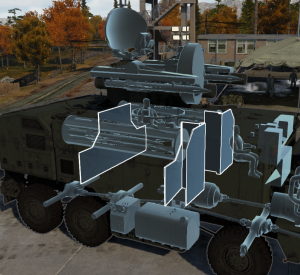 Internal armour of the FlaRakRad (5 mm)

As the FlaRakRad is the largest ground vehicle in game, and an SPAA, it is not hard for one to guess how the protection situation is. As there is no armour to speak of, the best bet for protecting this vehicle is not to be seen. Try hiding behind large hills, buildings near spawn, and other large obstacles. The non retractable search radar makes it hard to find spots tall enough to hide the FlaRakRad's immense size. However, due to the size of this vehicle, it can take ATGMs from helis occasionally, and can sometimes even eat APFSDS. However, any shot is very likely to cripple you, as the transmission is huge and easily hit.

Roland SAM
Autoloader
Automatically feeds projectiles into the breech. The speed does not depend on the skills of the loader
Ammunition10 rounds
Belt capacity2 rounds
Reload5.0 s
Fire rate145 shots/min
Vertical guidance-10° / 80°
Fire on the moveup to 1 km/h
Main article: Roland

It is recommended to change the radar range from 10 to 16 km, find a concealed spot near spawn and memorize where the helicopters' airfield is. Helicopters are easy prey for the FlaRakRad; but be careful to take them out quickly or you'll find you have a 9M127 Vikhr headed right at you. Be careful to not radar lock helicopters, as they usually have RWR and will detect you if you lock them. Try instead to hand guide the missiles. This isn't as hard as it seems, as helicopters mostly hover and without the RWR won't know where the missile is coming from. Once the VT1 missile is unlocked, this allows the FlaRakRad to be able to finally engage aircraft with any hint of reliability. Still, one must exercise discipline when choosing when to engage aircraft, as the VT1 can still be dodged. As for the VT1 against helicopters, it just allows the FlaRakRad to kill enemy helicopters quicker, giving them less time to react. All in all, the FlaRakRad is a competent SPAA once one unlocks the missile and has the flexibility to engage aircraft as well as helis. Keep in mind that after firing the second missile, the FlaRakRad will not begin reloading until the second missile hits a target or reaches its max range and self-destructs. This means if you miss the second missile, you are vulnerable to air attack while waiting to reload. Take care not to be hit, and you'll have a good time.

Experienced Ka-50/52 players will often fire multiple Vikr missiles at you, hoping that the first two of them will neutralize your missiles or they will have loaded rockets that will explode after a fixed distance and will try to shoot your VT1 missiles. You can make their life hard if you circle the target by moving the aiming reticle around the target in small circles, causing your missile to change direction really fast and making it nearly impossible to counter if done right. Remember that you do not need to hit the target directly due to the missile's proximity fuse.

Experienced pilots will try to side-climb outside your range and will try to attack from the top where your radar will not show the incoming plane. In order to prevent this from happening, set the range of the radar to 16 km instead of 10 km to detect any side-climbing planes to prioritize before they climb above the maximum radar elevation range.

The FlaRakRad self-propelled anti-aircraft missile system with the Roland 3 surface-to-air missile system became the most advanced modification of the Roland, Franco-German anti-aircraft missile. While the army version of the FlaRakPz 1 self-propelled air defense system was equipped with a tracked chassis, the air defense services and the German naval forces settled on wheeled chassis for AA systems for airfield protection. At the end of the 90's, a MAN 6x6 truck was chosen as a chassis for the Roland 2 complex, but soon a unified command vehicle on the chassis of the MAN 15t mil gl KAT I A1 (8×8) truck was adopted, which served as the basis for further development of the Roland family.

One of the latest modernization programs for the complex for the needs of the German army assumed the possibility of launching not only Roland 2 and Roland 3 missiles, but also promising long-range VT1 missiles, but the program was not completed and by 2003 Germany refused to further modernize the Roland complex in favor of more modern systems.