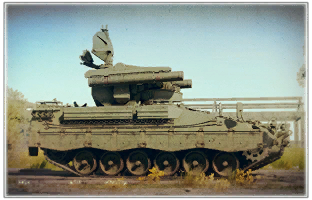 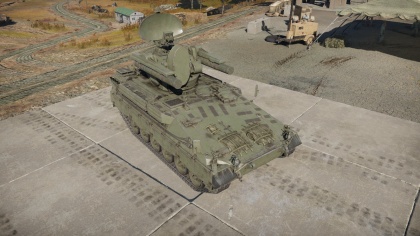 The FlaRakPz 1 Roland 2 is a rank VII German self-propelled anti-aircraft vehicle with a battle rating of 10.0 (AB/RB/SB). It was introduced in Update 1.89 "Imperial Navy".

The FlaRakPz 1 does not have any additional armaments to attack other vehicles or protect itself, limiting its offensive ability towards even slightly-armoured targets. Due to this, moving any distance from the spawn point will result in death due to the thin armour and increased visibility, due to vehicle markers, making you an easy target. Both the Roland 1 and Roland 3 SAMs both have a maximum speed of 900 m/s, with payloads of 3.3 kg and 4.45 kg of Composition B respectably, more than enough to deal with the only aircraft type (helicopters) it will encounter in this game mode. Moving alongside allies or waiting in or near spawn areas - where you have the best view of the sky - will be rewarding as when engaging medium to heavily armoured units, the explosive mass of the missiles will be most useful in destroying or disabling targets, requiring knowledge of vulnerable spots on enemy vehicles to deliver a killing blow. Due to the large explosive mass of both missiles, it can hull-break light targets.