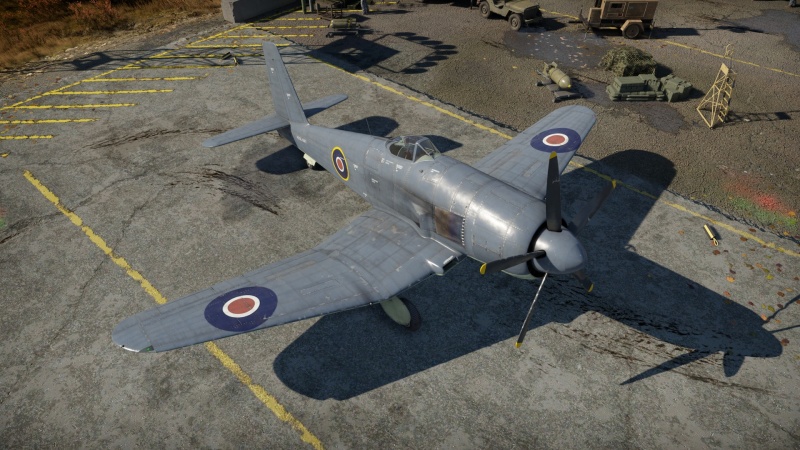 The Firecrest is a squadron rank II British strike aircraft with a battle rating of 2.7 (AB), 2.3 (RB), and 3.3 (SB). It was introduced during Update 1.89 "Imperial Navy" as one of the first Squadron vehicles. It represents the attempt to develop an improved naval aircraft from the troubled Blackburn Firebrand.

In reality only 3 prototypes were ever made, since the arrival of improved technologies such as the jet engine halted any major development of war birds with piston engines after the Second World War.

However, in-game, everyone's got a chance with the Firecrest. It could be considered as a hybrid between the Firebrand and a F4U Corsair, due to its gull shaped wings, durability, powerful engine and beautiful sleek appearance! Howbeit, it has other traits that make this plane well suited for the naval environment of War Thunder.

Once upgraded and spaded, the Firecrest is able to go anywhere it must go. Climbing to the sky or speeding steadily to a target. It all can be achieved.

The Bristol Centaurus 59 engine producing 2,475 hp is able to accelerate pretty quickly, something needed for sea and carrier landing and takeoff operations. This allows the plane to climb consistently to 6 km of altitude where the max speed can also be achieved while conserving all the manoeuvrability due to the supercharger and a great roll rate.

If necessary it can dive very fast and possesses air brakes for handling such speeds with ease. It does not turn that well horizontally but the skilled control of combat flaps and the airbrakes can prove adequate in several instances.

It's recommended to engage planes without carrying ordnance to maximize the flight performance, particularly the torpedo load.

The pilots should note that no armour protection is present, this will limit the ability to tolerate heavy fire since any armour-piercing bullet is capable of going through the entire plane. The strongest and yet the more vulnerable part of the plane is the engine. No head-on engagements or attacking bombers are advised since the radial engine with the pilot can be easily taken out.

Separately, the fuselage is quite resilient and sleek. This can often ricochet fire that would otherwise hit the spars and inflict greater damage. The only thing protecting the pilot from behind aside from the fuselage is a fuel tank.

Pilots should focus on improving most of the flight performance first then the payloads, since this plane won't perform like it should when stock. Rockets, bombs and torpedoes should be secondary.

The Firecrest is armed with:

Here's the main difficulty of the Firecrest: its offensive armament.

The M3 Browning machine guns are amazing for quick and precise attack. They will inflict severe damage or ignite the enemy plane, mainly because of the rapid fire of the 2 machine guns. What pilots should be constantly alert about, is the ammo counter, since these machine guns will deplete all the ammo very quickly.

Fixing a convergence up to the preference of attack and having the right ammo belt is necessary, as the low ammo input does not allow for long bursts or consecutive leading shots. It's also relevant to note that such machine guns are generally only available on American jets such as the Sabres and Thunderjets', thus making the Firecrest one of the few piston planes with such machine guns.

The Firecrest can be outfitted with the following ordnance:

RP-3 rockets - These are exceptional for many objectives. They have good armour penetration, moderate velocity and satisfactory amount of explosive mass when matched to contemporaries as US's HVAR or the Soviet's RBS-132.

Appropriate for most tanks excluding some heavy tanks like the Soviet KV series or the German captured variant, the KV I C 756 with a very tough turret of 105 mm. Targeting at the top of these tanks is suggested. Naval objectives such as patrol boats can be annihilated in one single shot; a real spectacle. Destroyers or anything heavier could withstand more damage, but their modules and crew will be decimated by these rockets.

500 lb G.P Bombs - They involve some skills at the moment of delivery since the lethal range for armoured targets is only of 4 m. For naval targets the lethal range is less of a drawback but the actual obstacle is dropping such bombs over AA covered ships. Pilots should note that these bombs might not consistently be enough to sink destroyers or anything bigger.

Mark XV torpedo - It's when everything else doesn't seem enough that the torpedo joins into action. This ultimate ship destroyer is very capable and usually one sole hit is enough. What is more important, is the way to deliver the torpedo without sacrificing the plane.

The Firecrest is an experimental torpedo bomber with average capacities. It has low anti-air effectiveness in Air Arcade battles due to rather clumsy manoeuvring and no armour protection. A good pilot is needed to fully exploit the handy machine guns this plane is armed with. It has a place in Ground Realistic Battles, thanks to its payload capacities and the extremely powerful 8 x RP-3 rockets. However its best place is in Naval Battles, where is possible to engage more freely in wider spaces and make use of the full ordnance capacities (once the Mark XV torpedo is unlocked for use). Due to the lacklustre firepower when stock, one of the recommended ways to gain the necessary research points for unlocking modules is to simply attack AI targets like artillery and trucks, then tanks as the 500 lb bombs are unlocked prior to the torpedoes.

Once the torpedoes are unlocked, the Firecrest performs similarly to other torpedo bombers of the rank. One of the outstanding traits is in its high survivability that can help in destroying one target if the tactics are played to the plane's strength (the good roll is perfect for low altitude flying). Aim towards destroyers or cruisers as they are larger targets that are easier to hit and prioritize the vessels that are threatening allies on the seas. However, try to ensure that the enemy ship is occupied with attacking surface targets so that their anti-air armament is not focused on the Firecrest to allow for some breathing room to position for an attack run.

Encounter mode proves to be one of the best for this plane. Here will be possible to infiltrate by the sides at low-level flight behind the enemies to the cargo ships, and release a torpedo from a safe distance. Always keeping in mind the torpedo drop requirements and the target. Is possible to risk a bit more if equipping bombs, but a tactic that might also work is to skip the bombs to the cargo ship swiftly retreating in the same direction, in a tactic that is known as skip bombing.

The main aspects of using MEC with this aircraft are the Supercharger and Radiators, since this will increase drastically the climb and high altitude performance as well as the dive speed and energy retention.

The Blackburn Firecrest was a British Torpedo Strike Fighter, derived from the earlier Blackburn Firebrand but designed from the outset as a torpedo strike fighter. Designed to the S.28/43 specification set by the Admiralty on February 26th 1943 for a 'Firebrand Torpedo Fighter with improved wing and improved pilot view', the Firecrest was designed with a number of issues of the Firebrand in mind. Specifically, effort was done to produce a type which had improved forward visibility to facilitate deck landings, and which had better lateral control at landing speeds. The design specification also called for the Firecrest to be powered by a Bristol Centaurus 77 engine powering a contra-rotating propeller.

Early on during its design, the Admiralty also ordered three prototypes which would have been driven by the Napier E.122 24-cylinder H-block engine, a 3500 hp development of the Napier Sabre used on the original Firebrand. However, it was soon found that in order to maintain an acceptable center of gravity, the heavy Napier engine would have to be installed behind the cockpit, which would require an extensive redesign and add considerable weight to the aircraft. As a result, the Napier E.122 powered variant was cancelled in October of 1945 before metal was cut on any of their prototypes. Just before completion of the design, the Centaurus 77 variant with its contra-rotating propeller was cancelled in January of 1946, and it was replaced by a 2,825 hp Centaurus 57 with a conventional five-bladed propeller. The first of three completed prototypes of the Firecrest flew on April 1st 1947.

The Firecrest differed from the Firebrand in having a cockpit that was set higher and more forward than that of the Firebrand, which combined with a shortened nose did improve the forward visibility during deck landing. A redesigned inverted gull wing conceptually not unlike that of the Vought Corsair did much to improve the type's low speed handling and take off characteristics: even at full weight, take-off was possible in just under 430 ft with a 29 mph headwind; its landing run was an impressive 390 ft with a 5 mph headwind. With its conventional five-bladed propeller, the Firecrest's top speed lay at 380 mph, some 38 mph faster than the Firebrand despite weighing slightly more. Unlike the Firebrand which used hand-folded wings, the Firecrest had power-assisted folding wings with a double fold.

However, it soon became apparent that the Firecrest was even more sluggish in handling than the Firebrand, that the design in itself did not give any distinct advantages over the Firebrand or the newly developed Westland Wyvern, and that it was less versatile than types such as the Fairey Firefly or Hawker Sea Fury. As a result, all development work on the Firecrest ceased in September of 1947, with the second prototype only being used for structural testing, and the third prototype used to test the power-boosted ailerons which were eventually fitted to the Firebrand TF.5A. All three prototypes were bought back by Blackburn in 1950, and scrapped in 1952.