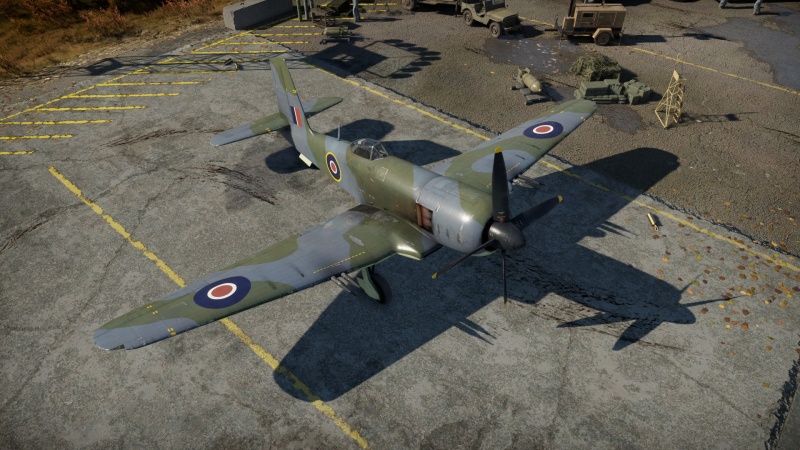 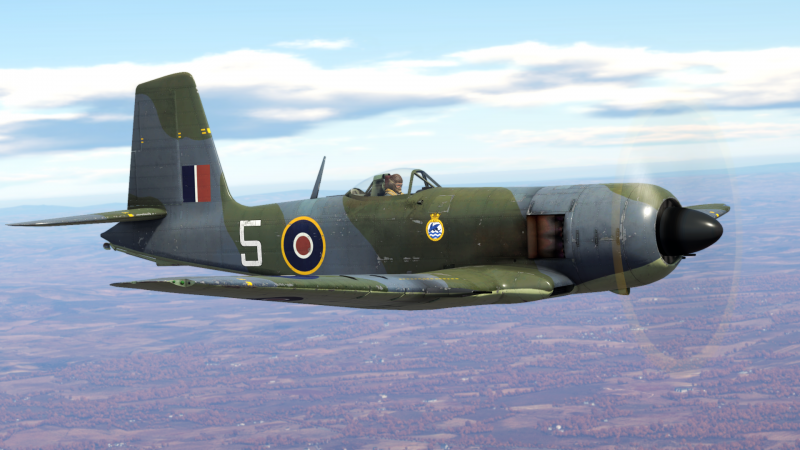 The Firebrand can be considered as a British P-47. With extremely heavy armament as well as a respectable secondary load, the Firebrand is foremost a strike aircraft, then a fighter. Carrying 4 fast-firing and high-capacity Hispano Mk.V cannons, the Firebrand Mk IV can rip through all aircraft at its BR and all "soft" ground targets with ease. The torpedo options allow anti-ship capabilities, and conventional bombs effectively destroy ground targets.

Originally designed as a naval fighter, the Firebrand in its attacker/torpedo bomber form still retains some characteristics of its roots. The plane has a surprisingly tight turn radius for such a heavy plane, though this is compromised by its extended wingspan intended to generate more lift while carrying payloads, which causes the plane to be less responsive and manoeuvrable compared to traditional fighters. Handling while banking and negative G manoeuvres can be described as "floaty" at best due to the extra lift that gets in the way of the plane. To counter excessive lift, the Firebrand's rugged and complex combat flaps can help to improve the plane's handling characteristics, especially below 420 km/h (the flap's rip speed).

Since dogfighting is not the Firebrand's greatest strength, the plane can be used as a boom-and-zoom fighter to some extent. The plane is somewhat slow to accelerate in a dive, although this can be pushed to its structural limit of 720 km/h. However, the Firebrand's control surfaces will start to lock up at 550 km/h and can be lethal, thus a small airbrake is featured to help restore the plane's controllability. As with most of the naval fighters, the Firebrand performs best at lower altitudes (below 4,000 meters).

Boom & Zoom is a good tactic in Arcade battles. Due to terrible handling characteristics, simply diving and flying flat is a good defensive tactic.

The Firebrand excels at destroying both "soft" (Armored Cars, AA, Artillery and Trucks) and harder targets such as Pillboxes and Tanks: with both 500 lbs (wing-mounted) and 1,000 lbs bombs (always center-mounted), along with 8 RP-3 Rockets at its disposal, it can make quick job of all mission objectives, being able to mix and match these loadouts. When equipped with the Ground Targets belt, only one or two quick taps will destroy "soft" targets, but can also destroy Light Pillboxes easily with sustained fire towards their roof.

Due to its air spawn in Air Realistic Battles as a Strike aircraft, the Firebrand can quickly swoop towards ground units, as it can sustain around 500 km/h in level flight after a shallow dive: however, it is recommended to retreat immediately after unloading onto ground targets, as both enemy Fighters and other Strike aircraft will most probably be attracted to the position. Enemy aircraft however, can still be taken care of easily if it's necessary, and none will survive a head-on towards the Firebrand's cannons. On the other hand, there is not much to do after an enemy Fighter starts to chase, as turn-fighting should be a last resort.

Thanks to its capabilities for Close Air Support in Ground Realistic Battles, the Firebrand acts as a great addition to a line-up, and while it can make up in firepower for what it lacks in energy retention or turnfighting capabilities, it is not a replacement for other aircraft of similar Battle Rating such as the Typhoon Mk Ib/L or the Spitfire Mk Vc/trop, the former being able to carry two 500 lbs or 1,000 lbs bombs, with the latter being limited to only two 250 lbs bombs; both being more focused on direct air-to-air countering than air-to-ground support.

In any case, the Firebrand can deliver great performance when it comes to ground attack, both with a bomb load or without it, and as long as it has the advantage of speed or altitude over the enemy, can still shine thanks to its heavy armament, as all of its ammunition belts include High-explosive Fragmentation Incendiary (HEF-I) shells, making any aircraft on the receiving end of its guns never escape unscathed. High situational awareness rewards the Firebrand with being able to choose its engagements in the case of being threatened by enemy aircraft, as retreating then re-engaging is more fruitful than getting distracted on ground attack: it can quickly counter any enemies that have dived low onto the Firebrand's altitude, as its turn-rate becomes much better at speeds in between 250 and 400 km/h, a quick turn-around to commit to a head-on can turn out well as long as the enemy had not had a significant altitude advantage.

Designed to a 1939 tender by the Royal Navy's Admiralty, originally the Blackburn Firebrand was intended as a carrier-borne escort fighter, with emphasis on its range over speed. This was due to a prevailing school of thought that carrier fighters' primary task was that of escorting strikes on enemy forces, with the aerial defence of the fleet best left to the ships' own anti-aircraft guns. The original tender, N.8/39, specified a carrier-borne fighter with a fixed forward armament of 4 x 20 mm cannons, preferably an aircraft with a two-man crew consisting of a pilot and a navigator for long-distance flights over water. Blackburn started preliminary work on such a design.

Problems with the prototypes, several adjustments to the aircraft's requirements and inability to get necessary engines towards the end of the war belated the Firebrand TF Mk IV's entry into service, missing World War II entirely. Though pressed into service, production ceased by March of 1947 and all were withdrawn from active duty by May 1953.