Difference between revisions of "FV4005" 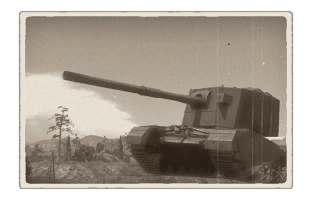 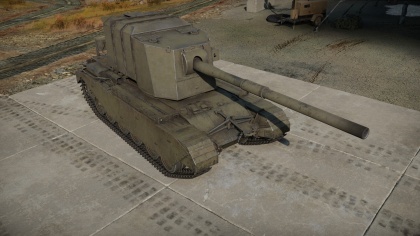 The FV4005 holds the distinction of being the single largest cannon available in War Thunder Ground Forces at 183mm, as well as having the longest reload with a stock time of 43.3 seconds. It can only fire HESH (High Explosive Squash Head) and has a limited turret rotation of +/- 45°.

The FV4005 Stage II has essentially negligible armour, the turret providing 14mm of protection from any given angle. Due to this and the vehicle's crew being largely based in the turret, the 4005 is extremely vulnerable to even .50 calibre machine guns. The only redeeming trait in regards to survivability is that the crew may survive some side-on attacks due to the sheer size of the gun breech. Regardless, an FV4005 player should not rely on surviving anything bar the lightest of machine gun fire.

The FV4005 doesn't represent anything special in terms of mobility; the vehicle utilises a Centurion hull and retains most of the same characteristics, including the somewhat sub-par reverse speed. Hull traverse times are reasonable, but not exceptional, and maximum forwards speed is a limited 28 km/h in RB/SB.

Due to the vehicle's limited mobility, players should play conservatively, avoiding flanking routes and any areas where there is no immediate escape route available. The Tracks upgrade is particularly valuable on the FV4005, as due to its limited turret traverse distance the improved hull traverse will on occasion be a saving grace.

Main article: Ordnance QF L4 (183 mm)
The FV4005 Stage II sports the largest cannon available in War Thunder Ground Forces, the 183mm QF L4A1, with the longest base reload time of any vehicle at 43.3 seconds. The L4A1 is restricted to the use of HESH only, due to the weapon originally being envisaged as an anti-emplacement howitzer. Despite this, HESH can be used to great effect against almost any possible target, provided shots are placed well - ideally on angled side armour (while ensuring the armour isn't angled enough to bounce). Despite the size and weight of the round, it has reasonable ballistics at 716 m/s velocity.

Important note: HESH round performance improves, within reason, when targets are angled. This is due to the 'squash head' the rounds are tipped by - on larger angles the head will 'squash' further and result in more internal damage. However, the improvements with angling are limited once the rounds reach their ricochet angles - past 73° of angling the rounds have a chance to bounce. As such it's best to limit rounds to less than 70° where possible.

The FV4005 has extremely limited ammunition, with a maximum of 12 rounds. Despite this, it's no mean feat to run out of ammo due to the extended reload time.

The FV4005's coaxial machine gun is of limited value; it should be used to clear small obstacles or if possible crew members in open-top vehicles. It can be used as a ranging machine gun while keeping in mind that the main weapon's ballistics do not follow the machine gun's trajectory exactly as the MG has a slightly higher round velocity.

The main in-game use of this tank is the elimination of hull-down tanks (similar to T30), super-armoured heavy tanks in general (similar to IS-7), well-armoured SPG's (similar to Ho-Ri) and the likes of them. Meanwhile, you still can help your team by hiding around and eliminating reckless rushers in 1 hit, when they aren't looking.

Your main goal in between your hunts is to survive and stay hidden, as you only have enough armour to stop 7.64 mm machineguns, and your reloading time is exceptionally long, especially if you lose either of the loaders. Contrary to popular belief, if you aim poorly with FV4005 it does not one-shot anything out of existence anyway. You should first get out of your cover (or wait for the enemy to get into your firing lines), then take aim at the enemy, and only then fire. HESH shell will do the rest for you if your aim and weak spot suggestion was correct.

Weak spots depend on the mode you play in. As an example, for most Soviet Union tanks, the frontal weak spot is the left side of the hull (for you - right side). It's also possible to target the back of their turrets in Realistic battle. However, if you fire at back of the turret of IS-2 in arcade mode, it may still survive with just 1 crew member (driver with very high "vitality" level), go into "last stand" mode, turn it's turret and fire back at you. As such, try to aim at places, from which spalling can definitely hit every last crew member.

likewise, in arcade mode, it's not enough to just eliminate crew in your turret, and your driver is hidden in the decently armoured hull. However, if your gun breech got damaged, there is a chance, that the shell in it will also be destroyed, and you won't be able to avenge yourself.

Going into sniper duels without preparations, like rangefinding and adjusting the gun beforehand, with this tank is ill-advised, as any sniper tank needs significantly less time to aim at you, due to fact that your turret cannot turn freely, your enormous profile and different ammunition type. They also can destroy you in 1 hit as well, by hitting your ammo.

Work started on a 180 mm self-propelled gun in 1950 by Nuffield Mechanizations & Aero. Designated the FV215B, the plan was to mount the gun onto the Conqueror hull.[1] It was intended for the three trial vehicles to be built from the span of 1951-1955. The project was cancelled in early 1957 with no prototypes produced.[2]

During the development phase of the FV215B, another project was done on the Centurion.[2] Labeled the FV4005, it was an attempt to mount the 180 mm on the Centurion hull. The design phase is distinctive in two parts, Stage I and II. Stage I had the gun mounted on an open-topped hull. The gun had a concentric recoil system and an auto-loader. Stage II had the gun encased in a lightly armoured, splinter-proof turret with a conventional recoil system and manual loading.[3][4]

In December 1952, the 180 mm gun was increased into a 183 mm gun mounting. Though a single prototype was made for testing, the project never passed basic feasibility. In August 1957, the project was abandoned as well.[3][4] The lone prototype is currently stationed outside at Bovington Tank Museum.

Skin and Camouflages for the FV4005 Stage II in Warthunder Live.