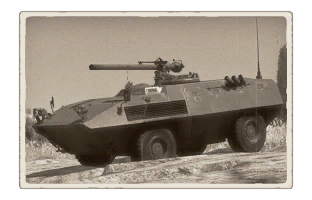 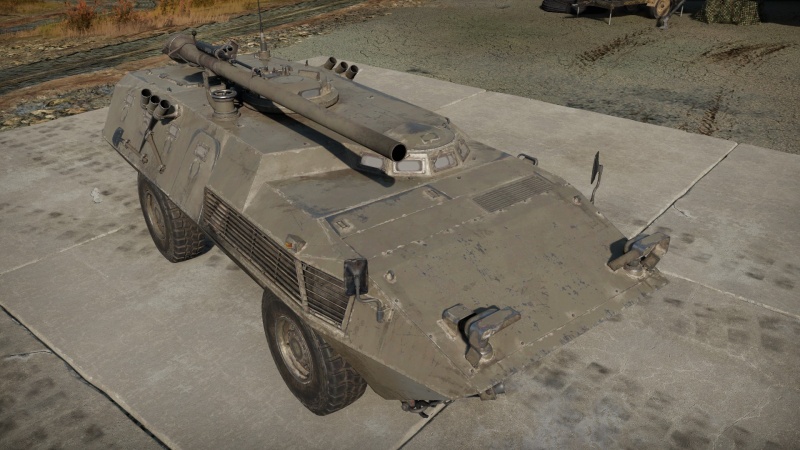 The side's obvious weak spots are the grills near the front that are only 5 mm thick. Considering that the vehicle has a hexagon-shaped cross-section if sliced from left to right, the upper plate of the slanted side offers 9 mm of protection after the grill and 10-12 mm around and in front of the grill. The lower side plate gives a whole new world of armour with a minimum thickness of 10 mm everywhere, which means at least the 7.62 mm machine guns can't penetrate the car through there. The doors have the same thickness as the rest of the sides.

The FIAT 6614's mobility is very good. The fastest speeds it can reach will depend on the terrain: on a track like the ones on Sinai, the FIAT 6614 can easily reach 60 or 70 km/h, and driving on an actual road or going downhill it will reach the 80s or 90s; but on a grassy field, it may only reach up to 45 km/h. Due to the FIAT 6614 being a wheeled car, going through sand, snow or a small uphill will trickle away its speed. The wheeled construction means the FIAT also cannot neutral steer, but it does have a small turning circle (tank-sized) and it can turn in this circle at 23 km/h. 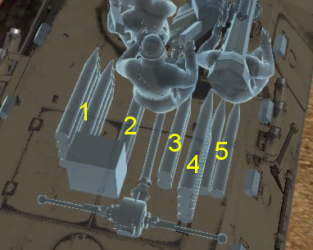 The M80 is a spotting machine gun attached to the M40A1 recoilless rifle. The low velocity of its projectiles and limited capacity make it ineffective against enemy ground vehicles, only being able to effectively damage exposed crew members. However, the ballistics of the weapon are aligned with the gun's ballistics, meaning that it can be used to range a target, rather than using the rangefinding skill.

The FIAT is a light tank destroyer with extremely potent anti-tank grenades that are almost guaranteed to slice through any armoured foe. Never put yourself on the front lines as your armour is not up to the task against anything heavier than .30 calibre machine gun fire, so striking from the shadows is the best option. One of the main upsides is that you don't have an actual gunner who exposes themselves to fire, meaning all you have to do is find a great position and remain hull-down. Getting to said position is fairly easy if you are on a map with easily accessible roads. The FIAT 6614 will manage to reach its top speed and overtake most of the vehicles at its battle rating, use your speed to your absolute advantage, with the FIAT 6614, to maximize your effectiveness on the battlefield, you need to be in places were regular enemies won't suspect vehicles to be shot at from. Another great feature that the FIAT 6614 has access to is the scouting mechanic. Scouting will allow you to earn even more points, whilst also providing great intel for your teammates to take advantage of. Due to the excellent penetration of the both HEAT and HESH rounds, this tank destroyer is best played pointing and shooting at the target, not minding weak spots, especially due to the overpressure damage mechanic. Although some tanks will be able to survive one or two shots, generally speaking you should make quick work of anyone you encounter. If you get spotted, you should quickly disengage and move to a new spot where enemies will again not suspect you shooting from, to disengage you can use smoke grenades to cover your retreat for a short while. Always remember to stay at a safe distance, as previously mentioned you won't be able to withstand much, if anything. You'll be at the mercy of artillery strikes and enemy aircraft. It's recommended to take cover inside a building or behind a natural obstacle that will protect you from such threats. Also keep in mind that in Arcade Battles, enemies can easily find out where you are located with the nametag and are able to quickly find out where your weak spots are.

The Fiat 6614 was an APC joint venture between Fiat and OTO Melara. Post-war Italy had realized the need of having light vehicles that could easily be deployed at long distances to further support the front-line troops, without actually being in the front-line. The Fiat 6614 was specifically made to fill in the requirements of the many military and para-military organizations, where some form of mobile armoured protection is required for personnel. The first prototype was made in 1972, which underwent many changes, both aesthetic and armament-wise. An example would be such as the Fiat 6614 having access to a dual .50 cal turret, which would be ultimately removed after testing. Fiat would be in charge of the engine and the automotive components while OTO Melara was in charge of the hull and weapon system. The Fiat 6614 would be outfitted with an IVECO 8062.24 diesel engine, this allowed the Fiat 6614 to reach speeds of 100 km/h. It had a max crew of 3, but being a APC, could carry up to 10 soldiers at once. One of its staple abilities was the fact that it could be amphibious (propulsion once in the water was provided by the road wheels), which further allowed it to push itself into it being a multi-role vehicle. There was plenty of optional equipment available for the Fiat 6614, such as: recovery winch, night vision equipment, smoke grenade discharges and also an air conditioning system. Armament-wise, due to its weight, it couldn't really support heavy loads (primarily also why the Fiat 6616 was made), this didn't stop it from having a few armaments installed, one of the more obscure variants being one with a FIROS-6 rocket launcher. It's good to note that it was also marketed as a mortar carrier, medi-vac ambulance and also a reconnaissance vehicle.

This FIAT 6614 is a further development prototype for anti heavy armoured target purposes by mounting a 106 mm M40A1 recoilless rifle forward of the commander's position on the turret roof. It was only a one-off, as far as we know of, which members of the Italian military would use to evaluate its effectiveness on the field. Ultimately it wasn't picked up due to other vehicles in the Italian army being much better candidates, and also due to the M40A1 recoilless rifle getting more and more obsolete. It was able to fire M40A1 standard munitions, such as HEAT and HESH, and the rounds would be stored near the backside of the vehicle.

In terms of service, the Italian Fiat 6614 is still technically in service, inside of the 'Polizia di Stato' (State police), mainly used for riot control and during natural disasters where its amphibious abilities can come in handy. Other times it was used would be when the Italian Army deployed a number of Fiat 6614's to Bosnia and Somalia, for safekeeping. They had a huge success in the export market, one of the biggest successes being in the South Korean army. The Fiat 6614 would be license produced in South Korea, where it was widely used, although as of 2022 it's said they've completely gone out of service. The South Korean Fiat 6614 is known as the KM900, while locally introduced variants, known as the KM901 can include an armoured ambulance, mortar carriers, and command vehicles. Other countries still using it to this day include Libya, Somalia, Tunisia, Argentina, Venezuela, and Peru. Fiat 6616 also known as 'Autoblinda 1974' (AUBL/74) is a further development model of the Fiat 6614, after OTO Melara and Fiat engineers started experimenting on up-arming the Fiat 6614.