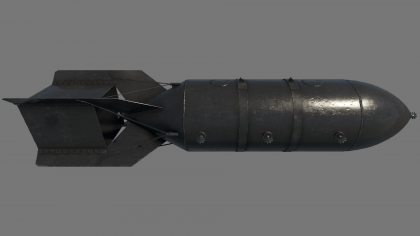 With a huge destruction radius of 105 metres nothing that stands near the FAB-5000 is likely to survive. Simply aiming the bomb near a capture zone will guarantee destruction of anything inside of it (this also applies to teammates so be careful!). The fragment dispersion is very effective even past 200 metres thanks to almost 2 tons of steel surrounding the TGA-16 explosive filler, more than enough to kill lightly armored vehicles such as SPG's and SPAA or at least damaging crew. It is important to set a fuze of at least a couple of seconds or to bomb from high altitudes as any planes near the bomb are likely to take critical damage.

The FAB-5000 is commonly used for destroying airfields in Air battles, however this requires other bombers in the team to take out bases first since the Pe-8 can only carry a single bomb it would be a waste to just use it on a base.

The FAB-5000 shows it's strength best in Ground battles where it is commonly referred to as the "Nuke" due to it's large explosive mass. The Pe-8 is easy to shoot down when at low altitude as it is a heavy strategic bomber, it's safer to bomb from high altitudes where the Pe-8 is far enough away to not be damaged by the bombs splash damage, even without a fuze. The easiest targets to aim for are capture points as these are the most important area for tanks to be inside, unfortunately for the tanks by being near the capture point they are very visible from above. Once there are multiple tanks inside of the capture point the FAB-5000 is the perfect weapon for taking them all out in a single strike as the explosive mass is enough to kill everything inside of it. meanwhile the Pe-8 can stay at high altitudes where it is safe from enemy fighters.

-the Pe-8 is vulnerable to SPAA

-low altitude bombing is almost impossible due to the explosion being enough to kill the Pe-8 if it is too close.

-without proper communication, teammates are at high risk of being killed by the bomb