Difference between revisions of "F8F-1B (France)" 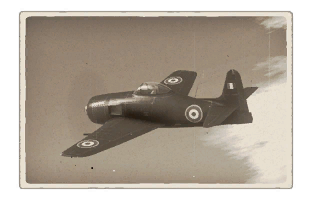 In AB, the F8F-1B can perform at its prime, which is, accordingly, remarkably. Due to the lack of damage due to overheating and such, the F8F-1B can easily outstrip any piston-engined fighter in a climb once upgraded. Prior to the engine-injection upgrade, the 1B performs very well, but not as sublimely as it does with the latter modification. Thus, climbing and BnZ match perfectly with the F8F-1B in AB due to its astounding climb rate, speed, acceleration, and weaponry.

The Bearcat was the direct descendant of the famous Hellcat. Indeed, in the summer of 1943 a team of engineers from Grumman began, at the request of the American authorities, the study of the replacement of the Hellcat. It was the project called G58 which would use the same engine as its predecessor, the very good Pratt & Whitney R-2800 double Wasp. The aircraft was very light and its armament was reduced compared to its predecessor. Indeed for it to be more efficient it had a lighter cell to gain maneuverability and ascent speed.

Grumman engineers therefore studied the lightest possible cell capable of accepting the heavy weight of the double Wasp R-2800 W engine. The Americans always had in mind the performance of the Japanese Zero, which were light and well-motorized and which were the surprise at the start of the Pacific War. It was therefore important that the new aircraft beat the Japanese on their own terrain : maneuverability ; even sacrificing the usual strengths of the Hellcat: armament and protection.

Two prototypes were ordered on November 27, 1943 called XF8F-1. The first flight took place on August 31, 1944 only nine months after the order. The tests went perfectly even if it was necessary to modify the drift to resolve a certain instability in flight, especially in yaw.

The F8-F1 "Bearcat" arrived too late to participate in the battles of the Second World War, but they were however embarked on the US aircraft carriers.

These planes, which are particularly well studied, are considered to be the best piston engine fighters of all time, even if they have never been in combat on the American side.

The first Bearcat (44 ex.) Arrived in Saigon on 07/02/1951 aboard the aircraft carrier "Windham Bay". The second delivery (46 ex.) Took place on 03/25/1951 by the aircraft carrier "Sitkoh Bay". The whole joined Parc 482 de Bien Hoa for destocking. Other deliveries to the Air Force were made in 1952 and 1953 bringing the total to 209 copies, it was F8F1 / F8F1B. The aircraft were either equipped with machine guns or cannons, which explains the two names, version "B" corresponding to the cannon version. These weapons were easily recognizable because if the machine guns were completely embedded in the wings, the guns protruded from the leading edge.

The main criticism of the Bearcat was their relatively low autonomy, for this the devices intended for France were modified so that the arming pylons could also receive additional releasable tanks, the versions delivered had a designation US F8-F1D and F8- F1BD.

During the battles in Indochina the Bearcat were used as support plane and they gave full satisfaction for this use. Many accidents were deplored, many on takeoff or landing, often without too much seriousness for the pilot, which was not the case for combat accidents where many pilots died ...

The last Bearcat were returned to the United States either delivered to Vietnam or Thailand in late July 1956.